Elite Squad: The Enemy Within 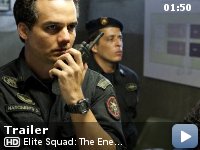 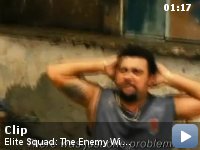 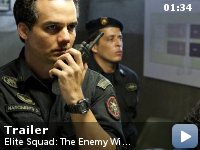 After a prison riot, former-Captain Nascimento, now a high ranking security officer in Rio de Janeiro, is swept into a bloody political dispute that involves government officials and paramilitary groups.

Storyline
After a bloody invasion of the BOPE in the High-Security Penitentiary Bangu 1 in Rio de Janeiro to control a rebellion of interns, the Lieutenant-Colonel Roberto Nascimento and the second in command Captain André Matias are accused by the Human Right Aids member Diogo Fraga of execution of prisoners. Matias is transferred to the corrupted Military Police and Nascimento is exonerated from the BOPE by the Governor. However, due to the increasing popularity of Nascimento, the Governor invites him to team-up with the intelligence area of the Secretary of Security. Along the years, Fraga, who is married with Nascimento's former wife, is elected State Representative and Nascimento's son Rafael has issues with his biological father. Meanwhile Nascimento and the BOPE expel the drug dealers from several slums but another enemy arises: the militia led by Major Rocha and supported by the Governor…

When Nascimento enters the restaurant to confront Guaracy, the man wearing the blue and white striped shirt who stands to congratulate him is Rodrigo Pimentel, the real-life former BOPE officer who co-wrote the screenplay of 'Tropa de Elite', and whom the character of Nascimento is based upon.

Rocha:
Each dog licks his own dick.


I'll say one thing right off the bat, this movie is incredible. I saw
it in a packed theater at the Sundance film festival and I've never
heard louder applause from an audience. I would recommend watching the
first film, just because its also very good and introduces all the
characters. However, this film stands on its own. The director sought
to make this stand out from the first film and he succeeded. This has
fantastic action, great dialogue, and some hilarious dark humor. But
most of all, its intelligent, its extremely well made, it's not plagued
with any awkward or out of place moments. For some viewers, this film
might actually be a learning experience. If you want to see an action
film that isn't 90% action and 10% plot. If you want something that's
hardcore, fearless, and has a message, this is it. Check it out, you
won't be disappointed.