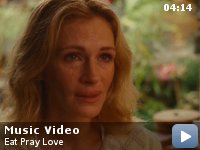 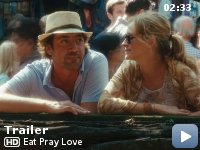 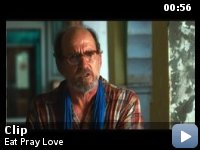 A married woman realizes how unhappy her marriage really is, and that her life needs to go in a different direction. After a painful divorce, she takes off on a round-the-world journey to "find herself".

Storyline
Liz Gilbert (Roberts) had everything a modern woman is supposed to dream of having – a husband, a house, a successful career – yet like so many others, she found herself lost, confused, and searching for what she really wanted in life. Newly divorced and at a crossroads, Gilbert steps out of her comfort zone, risking everything to change her life, embarking on a journey around the world that becomes a quest for self-discovery. In her travels, she discovers the true pleasure of nourishment by eating in Italy; the power of prayer in India, and, finally and unexpectedly, the inner peace and balance of true love in Bali.

Taglines:
Let Yourself Go This August

"Samba Da Bencao" by Bebel Gilberto, featured during the Bali sequence of the film, also appeared in
Closer, another film featuring Julia Roberts.

I felt self conscious and embarrassed somehow. Is this the model woman
we should be inspired by? Oh my God! She's like a bad replica of a
mediocre man. She abandons her husband and he's the one, quite rightly,
who feels betrayed. She uses James Franco and then throws him away.
Keeps Richard Jenkins at arms length until she discovers he has
something that may be useful to her and then, Javier Bardem…She
shouts at him I don't have to love you to love myself. What? She reeks
of an awful case of selfishness but as she is played by Julia Roberts
the whole thing becomes rather confusing. Is she a modern heroine? Oh
God, I hope that wasn't the intention. I felt as far away from her even
further away from the character she played in "My Best Friend's
Wedding" Remember that one? In that one she becomes a criminal, really,
yes, a criminal, to ruin her friend's wedding. Oblivious to the fact
that's he's clearly happy with Cameron Diaz. No, she's only worried
about herself. I'm giving "Eat Pray Love" a 3 and not a 1 because some
landscapes, geographic as well as culinary are, quite simply, breath
taking. Also Javier Bardem is worth the price of the very expensive
ticket.