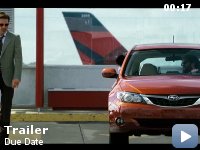 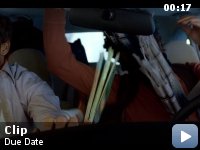 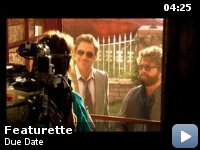 High-strung father-to-be Peter Highman is forced to hitch a ride with aspiring actor Ethan Tremblay on a road trip in order to make it to his child's birth on time.

Storyline
Peter Highman (Robert Downey Jr.) must get to LA in five days to be at the birth of his firstborn. He is about to fly home from Atlanta when his luggage and wallet are sent to LA without him, and he is put on the "no-fly" list. Desperate to get home Peter is forced to accept the offer of Ethan Tremblay (Zach Galifianakis) to hitch a ride with him cross-country. Peter is about to go on the most terrifying and agonizing journey of his life.

Shipped to theaters under the code name "Maternity Day".

Continuity:
While on the road between Texas and California, the number of cars surrounding the vehicles that Ethan and Peter drive changes between shots.

Peter Highman:
I just had the strangest dream. It's Friday. We're at the hospital. But it's not a hospital, it's a, a, a forest of sorts. And I know that because right next to you there's a bear. A grizzly, cooling his feet in a stream. And all of a sudden, you begin to deliver, and I can't get to you. But the bear can. And the next thing I know, he is holding our beautiful baby boy. And here's where it gets odd. Uh, he chews the cord. But, strangely, I'm okay with it. That's gotta be a good sign.

Low brow version of what was done better by Steve Martin and John Candy.

This is a movie I was prepared to like because Robert Downey is an
excellent actor and Zack G has proved to be a weird character who can
be very funny in the right film.

But, it just doesn't work very well. This story has been done before,
and with much better effect, in Planes, Trains, and Automobiles. The
two movies have a very similar story arc, but in the one case you have
two very funny men playing actual mature adults who have differing
personalities, and in the other you have two men who are immature
imbeciles with differing personalities. The former are likable, while
the latter are just annoying.

Zack G's character is just too bizarre to be credible, but at least you
know where they are going with him. Downey, on the other hand, is an
excellent actor badly miscast here. His demeanor is just too "dark" and
his personality too brooding and cranky to play the part of a good
family man trying at all costs to get home in time for his child's
birth. To be honest, his character simply isn't very likable, and is
sometimes just downright mean, even spitting in an innocent dog's face.
This is in stark contrast to the frustrated everyman played by Steve
Martin in P,T,&A – a person every traveler (stuck next to an obnoxious
slob) understands implicitly. Another example of such a role being done
to perfection is Jack Lemmon in The Out of Towners.

Perhaps the most memorable line in the movie was Downey proclaiming
that he had never done drugs in his life. Given Downey's well
documented real-life problems, his statement in the movie couldn't help
but make the audience compare the character to reality, thus serving to
knock down the "4th wall" in the process. No doubt the contrast was
created by intent, but I'm not sure it was a great idea.