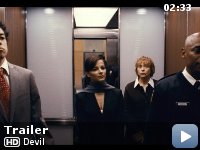 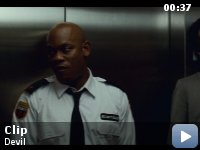 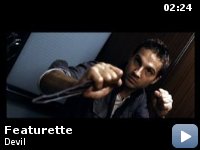 A group of people are trapped in an elevator and the Devil is mysteriously amongst them.

Storyline
In Philadelphia, Detective Bowden is still grieving for his wife and son, killed in a hit-and-run five years ago. When someone jumps from a skyscraper onto a truck, Bowden is sent to investigate. Meanwhile, five strangers are trapped in an elevator in the building where the jumper committed suicide. The communication radio in the elevator is broken but the guards, Lustig and Ramirez, observe the individuals via CCTV as events unfold. Tensions run high among those trapped, so Lustig calls the police and Detective Bowden assumes the case. Without being able to contact the individuals, he tries to work out who they are, but he can only account for four of them. Time is running out for the occupants of the elevator, as Bowden realizes he has to get them out quickly.

Taglines:
Five strangers trapped. One of them is not what they seem.

Director Trademark:
[M. Night Shyamalan]
[Philadelphia, PA]
The film takes place in Philadelphia, and the detective is from the Philadelphia Police Department.

Revealing mistakes:
When the crashed car with the cop's family is shown, the kid was thrown through the windshield (there is a hole), although the car was hit on its side.

Ramirez:
[voiceover]
When I was a child, my mother would tell me a story about how the Devil roams the Earth. Sometimes, she said, he would take human form so he could punish the damned on Earth before claiming their souls. The ones he chose would be gathered together and tortured as he hid amongst them, pretending to be one of them. I always believed my mother was telling me an old wives' tale.

Maybe it's because M Night Shyamalan is finally coming to terms that he
no longer is the toast of the town, that he has decided to focus his
energies on producing and writing suspenseful thrillers for his project
known as The Night Chronicles, with the first film Devil off the
blocks, and others to come including his original story idea from his
planned sequel to Unbreakable. We know how Shyamalan of late likes to
direct and include himself as one amongst the cast, though this time it
probably took a lot of effort to vacate that director's chair and quash
that acting bug, to allow someone else to helm what is essentially a
film that's right up Shyamalan's own territory. It's almost like
putting a candy jar in front of a kid, but not allowing him access at
all.


Enter directors Drew and John Erick Dowdle, who I thought made a decent
effort in bringing to life Shyamalan's story set around the confines of
a claustrophobic lift, where five strangers happen to be at the wrong
place at the wrong time, each of them being trapped inside the lift and
sharing some common traits that will be revealed as the story wore on.
The film addresses the notion that nothing is ever coincidental,
especially if powerful negative forces like the devil decide to walk
the earth and claim a few souls, while at the same time having fun
toying with their prey. Weaving in a folk tale like what he did for
Lady in the Water, Shyamalan's tale here involves the full works of how
the devil operates, and comes with a method to defeat the supernatural
forces seen in the film.

The directors managed to steer clear of the usual clichés for a fright
fest, and rightly so as well because this is not that film. Granted
that there are a few well crafted scenes to suggest that there are
spiritual elements involved in how the victims – a mechanic (Logan
Marshall- Green), an old woman (Jenny O'Hara), a young woman (Bojana
Novakovic), a guard (Bokeem Woodbine) and a salesman (Geoffrey Arend) –
the real draw is how visually arresting this film is in capturing fear
from within close quarters. The opening sweeping shot of the city of
Philadelphia upside down will bring about some disorientation, before
reducing that spatial distance down to within the lift, mirroring that
view through a CCTV camera back to the building's security control
room, which to me is where some of the best instances of the film
shines through.

I'd actually preferred what went on outside of that lift, since what's
going to happen within is more like a done deal, with one of the five
already revealed through marketing that he/she is someone who doesn't
belong. There's more fun in following Detective Bowden (Chris Messina),
who has to make sense of what's going on, balancing his deductive
prowess against something that cannot be explained by logic, and
watching how his due diligence and process get blown to smithereens
when at first he thinks this is a simple open and shut situation, until
he realizes that he's up against something that's inexplicable. It's
one thing to swagger in with a plan, before fear sets in that one can
be so helpless when trying to save the lives of others.

The strength of the film lies in Shyamalan's story, which is
deceptively simple, yet highly effective in weaving all the plot
threads together, and the linking up of the characters so crucial in
providing a satisfying finale. Fans of Shyamalan's stories will find
that he still has more than enough gas in the tank to come up with
suspenseful tales that others now have a chance to helm on the big
screen, something like what Luc Besson does these days. My interest is
now piqued to see how the rest of the Chronicles will present
themselves.