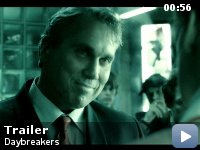 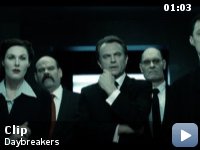 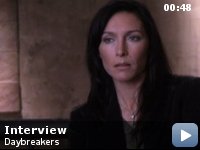 In the year 2019, a plague has transformed most every human into vampires. Faced with a dwindling blood supply, the fractured dominant race plots their survival; meanwhile, a researcher works with a covert band of vamps on a way to save humankind.

Storyline
In a world 10 years into the future, vampires make up the vast majority of the population with only 5% of the human race remaining. This presents particular challenges as the vampires' food supply – human blood – is dwindling and rationing is now the norm. There is growing evidence that vampires deprived of an adequate blood supply are themselves evolving into wild, vile creatures that attack anyone and anything in order to survive. Dr. Edward Dalton, a vampire and hematologist who works for a pharmaceutical firm, has been working on finding an artificial blood supply that will meet the vampire society's needs. He is sympathetic to humans and sees his work as a way of alleviating their suffering but his views on finding a solution change considerably when he meets someone who found a way to transform himself from being a vampire to again take human form.

Taglines:
The battle for blood begins.

Continuity:
In the part where Edward goes to meet "Elvis" under the tree. Audrey is being walked up at gun point. When Edward turns around, between Edward and Elvis you can see the drivers side fender full of holes from gun shots and again during the scuttle between Elvis and the soldier. But seconds later you'll see the army Hummer driving up and shooting up a flawless fender.

Senator Westlake:
Let's be clear about this. Humans were offered a chance to assimilate, but they refused. Therefore, they are enemies of the state and will be captured and farmed for blood supply.


I attended the World Premiere of "Daybreakers" at the 2009 Toronto
International Film Festival. Like many genre films being screened here,
it's another fascinating hybrid — let's call this one vampire sci-fi
action adventure.

This Australian horror film (is it something in the water?) was written
and directed by brothers Michael and Peter Spierig, the very same
filmmakers who closed down the legendary Uptown Theatre in Toronto with
"Undead" in 2003. That made this a homecoming of sorts. In fact, it
turns out they'd been working on "Daybreakers" since that very day.

It's 2019, and there's been a role reversal — the world is populated
primarily by vampires. Humans are now a hunted minority and an
essential food source — think "Alien" meets "Soylent Green." Charles
Bromley (Sam Neill) is the head of a mega-corporation which reaps hefty
profits off the "arrangement." Ethan Hawke plays Edward, chief blood
researcher. Later, we'll meet outlaw Elvis (Willem Dafoe). His role
here becomes more pivotal as the story progresses but I'll leave it at
that.

All are up to the task but, despite the presence of veterans Neill,
Hawke, and Dafoe, "Daybreakers" is still story-driven and would be less
effective if not for an ingenious plot filled with unexpected turns and
nonstop action that had me on the edge of my seat, literally. The
script is laden with unpredictable twists and shocking reveals that
will surprise viewers. Horrific mutant creatures appear out of nowhere
with perfect timing.

The brothers Spierig take a thorough hands-on approach, involving
themselves in many of the technical aspects along with writing and
directing. Ben Nott's sweeping cinematography and crisp editing by Matt
Villa helps fulfill their vision of a dark world in which the
protagonists are often difficult to identify.

Groundbreaking visual and special effects often elicited cheers from
the audience here. I was wide-eyed from start to finish witnessing some
of the most jawdropping stunts and shocking "kills" I've seen in a
genre film. The color palette is essential to the story as, of course,
the undead can only come out at night. Since most shots are necessarily
interiors or in darkness, pushing the blue reflects the bleak lighting
conditions under which the population lives, as well as the washed-out
appearance of what (we imagine) vampires look like. As in most genre
movies, sound is as essential to the story as are characters, and
composer Christopher Gordon's masterful score matches up with the
brilliant work of the effects team to punctuate the many intense action
sequences.

Michael and Peter Spierig attended the screening along with Willem
Dafoe and Sam Neill. The Q&A ran well into the early morning hours.

(NOTE: "Daybreakers" was the runner-up for the Midnight Madness
Cadillac People's Choice Award)