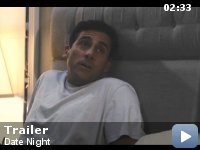 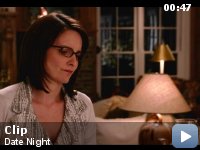 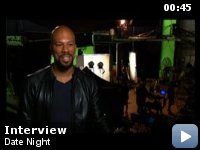 In New York City, a case of mistaken identity turns a bored married couple's attempt at a glamorous and romantic evening into something more thrilling and dangerous.

Storyline
Phil and Claire Foster are a couple who have been married for several years. Their days consists of them taking care of their children and going to work and coming home and going to bed. But they find time to have a date night wherein they go out and spend some time together. When another couple they know announce that they're separating because they're in a rut, Phil feels that he and Claire could be too. So when date night comes Phil decides to do something different. So they go into the city and try to get into a new popular restaurant. But when it's full and still wanting to do this, Phil decides to take the reservation of a couple who doesn't show up. While they're having dinner two men approach them and instructs them to stand up and go with them. They think the men are with the restaurant and want to talk to them about taking someone else's reservation…

There is an additional outtake after the credits.

Continuity:
At the end of Phil & Claire's speech in the car, he's facing her. In the next shot, he's facing forward.


I wonder how many married couples out there can attest to their
lifestyle being nothing but revolving around work, family and
especially kids, with the latter just sapping whatever free time they
have in their waking hours, only to find themselves stuck in a
wash-rinse-repeat cycle. The film examines in a comical fashion of
course, the lifestyle of the typical family with working parents and
young children, and how there isn't anything known as personal time,
and having routine becoming the rot in their lives.


For the Fosters Phil (Steve Carell) and Claire (Tina Fey), such is
their married life, with spontaneity and energy being sucked so dry,
even their regular date nights seem like a chore. You know, that
precious night where you think you can paint the town red with a
babysitter looking after the kids, and the sad thing being that even
that can turn out to be lifeless, save for their favourite game played
during dinner, where they adlib what they think about other diners
around them.

Which is pretty cool, given that the two comedians, as the blooper reel
played during the end credits showed, hammed it up a lot with awesome
ad-libbing and improvisation, that never fail to bring on the laughter.
In fact, opportunities where they are cut loose and allowed to go
really crazy, are some of the best parts of the film, breathing comedic
life into a very simple story of how their, well, little white lie in
order to get a table at a swanky restaurant, would turn their date
night upside down into a crazy urban adventure, filled with thugs,
cops, and well, a beefy Mark Wahlberg.

If I had a physique similar to Wahlberg's security expert Holbrooke,
heck I'll strut around topless as well all the time, which serves as a
running joke about Man's insecurities about the pectorals and abs of
another. One of the nicer themes here involves how couples, beside
spending time together, have to emotionally connect and be honest and
upfront about their desires, and especially fears as well. In between
pursuits and comedy, director Shawn Levy pauses the pace appropriately
to inject some dramatic elements to sneak in a moment or two to examine
just that, before stepping on the pedal to floor the film to its
finale.

Like I mentioned, it's otherwise a very straightforward film that
doesn't try to be more than it can be, keeping things simple and to the
point, with great cameo appearances with the likes of Will.I.Am, Mark
Ruffalo, James Franco and Mila Kunis being those instantly
recognizable. Carell and Fey share an excellent chemistry and play off
each other's antics really well from wit to the timing of their
physical comedy, and you'll find yourself rooting for this average,
normal couple, to be going one up against their adversaries in a single
nighttime adventure, since all they want is to get out of their
predicament, and back to their home and children like all parents do.

Stay until the end of the credits if you didn't have enough of the
restaurant scene where Carell and Fey pose as arrogant Euro-trash, for
additional laughs.

TagsUSA
The Hunter
The Extraordinary Adventures of Adèle Blanc-Sec