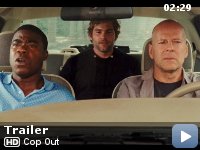 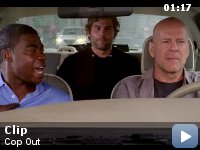 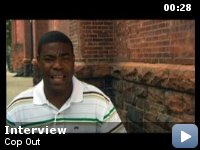 A comedy about a veteran NYPD cop whose rare baseball card is stolen. Since it's his only hope to pay for his daughter's upcoming wedding, he recruits his partner to track down the thief, a memorabilia-obsessed gangster.

Storyline
After a clumsy operation trying to capture a drug dealer, the N.Y.P.D Detectives Jimmy Monroe and Paul Hodges are suspended for one month by their Captain Romans. Jimmy decides to sell his rare baseball card to pay for his daughter's expensive wedding while his jealous partner believes that his wife is cheating on him with their next-door neighbor. When Jimmy sells his card to a memorabilia store, the place is burgled by two small-time thieves and the detective loses his card. They track down the thieves.

Taglines:
Rock out with your Glock out

The title is a pun, obliquely referring to being changed from "A Couple of Dicks". That title was itself a pun, with "dick" being 1940s slang for "detective," and was actually spoken by someone in the precinct after the interrogation scene.

Revealing mistakes:
In the car chase sequence through the cemetery, Jimmy shoots out the back of the car and the assailants shoot into it, however the glass can be seen to only have one small hole in the middle of it.

Paul Hodges:
You know what today represents? Nine Jim. Nine years me and you been together. *Nine* we been main shit stains. I know some dogs that don't even live to be nine. You're lucky if you get seven years out of a Great Dane. But me and you been puttin' it together for nine…
[whips out a card]

Paul Hodges:
Jim, open it up. I wanna see the expression on your face.

No reason to seek out Cop Out


What was Kevin Smith thinking? An audacious critic of society and film
in particular, and no stranger to poking fun at himself I can foresee,
a few years down the road, a sheepish Smith laughing off his
involvement in this torturously unfunny genre film. What he may lack in
compelling direction skills, he more than makes up for in witty
screenplays with equal balance raunch and insight having crafted
classics such as Clerks and Chasing Amy. With Smith absent from the
writing role there is absolutely no reason to seek out Cop Out.


Calling Cop Out a 'buddy cop' film would be a gross misnomer. To
qualify as such, we would actually have to witness some aspect of
'buddy'. Bruce Willis and Tracy Morgan, who co-star, have absolutely no
chemistry and I did not believe for a single second they would ever be
friends, or even be able to tolerate one another for that matter.
Furthermore, I did not believe for a single second that Tracy Morgan
could ever be a cop. I am willing to suspend some disbelief in movies
like this but c'mon. This role would have been kin to casting Betty
White in Taken. Morgan is a very funny man in supporting situations,
with 30 Rock being an apt example (Although that show benefits from
Tina Fey's screenplay. If she had penned Cop Out this review could be
reading far differently) but as with actors like Chris Rock and Chris
Tucker, a little goes a long way.

Then we have Bruce Willis who just seems eager to leave. I have never
seen Willis mope his way through a movie like this; all of his roguish
charms seemed drained by the horrific writing and familiarity of the
gags. To make matter worse yet, we get a horrendous performance from
Sean William Scott, also a very funny man, whose character is as
annoying as it is perfunctory. Many have been calling this a familiar
rehash of buddy cop flicks of years past; I wish. I would have begged
for a Beverly Hills Cop XXII over this near abomination.

The plot, in case you care, centers on Willis' and Morgan's Jimmie and
Paul, two NYPD detectives who stumble into a drug ring after Jimmie's
prized baseball card is stolen in front of his eyes during a robbery.
He needs the card to pay for his daughters wedding and as he searches
with the help of the criminal by which it was stolen (William Scott)
uncovers more than he had in mind.

In summation, this film fails as a comedy, fails as an action film,
fails as a breakout role for Tracy Morgan, fails as a return to the cop
genre for Willis and mars Kevin's Smith's mostly unblemished track
record. Originally titled A Couple of Dicks, the title was then changed
to what you now see on the marquee. I can only assume this was a
backhanded reference to the state of Smith's creative integrity.