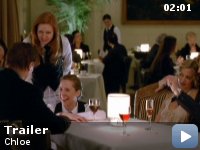 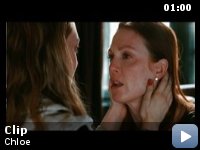 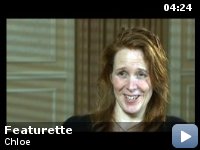 A doctor hires an escort to seduce her husband, whom she suspects of cheating, though unforeseen events put the family in danger.

Storyline
Catherine and David, she a doctor, he a professor, are at first glance the perfect couple. Happily married with a talented teenage son, they appear to have an idyllic life. But when David misses a flight and his surprise birthday party, Catherine's long simmering suspicions rise to the surface. Suspecting infidelity, she decides to hire an escort to seduce her husband and test his loyalty. Catherine finds herself 'directing' Chloe's encounters with David, and Chloe's end of the bargain is to report back, the descriptions becoming increasingly graphic as the meetings multiply.

Taglines:
If the one you love was lying to you, how far would you go to find out the truth?

Several months after this film's DVD/Blu-ray release, Atom Egoyan announced to The Toronto Star that this film had became his biggest moneymaker ever.

Factual errors:
When Dr. Stewart is in her son's room and checks a message from Chloe the date shown is Friday, 25 March 2009. The correct date should be Friday, 27 March 2009.

Something A LOT different for Amanda Seyfried….6.5/10


This film reminded me of the 90's wave of erotic thrillers. It's got
all the elements, including a healthy dose of softcore sex scenes which
surprised me because Amanda Seyfried has such an endearing, innocent
look about her. But she's such a good actress though that this doesn't
prevent her from convincingly playing the role of seductive call girl
Chloe. Julianne Moore plays Catherine, a gynecologist who suspects her
flirtatious husband (Liam Neeson) is having an affair with one of his
students. While at work Catherine observes Chloe entering and exiting
hotels with several men so she can make a pretty good guess at Chloe's
profession. Catherine decides to use Chloe as bait to see if her
husband would submit to the temptation of an affair with Chloe.


And even though that is the basic storyline, there is so much more that
is left unsaid; things Catherine thinks she knows but doesn't know
about her husband, things Chloe knows about Catherine that Catherine
herself doesn't even know; and in the middle of it all, the viewer who
finds out we didn't know much at all about it all. The audience is
pretty much kept in the dark as to what is really going on with Chloe
until one small scene that immediately switches the direction of the
movie. It's not one of those hokey melodramatic twists, but will
definitely have you playing back the entire movie in your mind because
it sheds everything in a new light. Chloe brags at the beginning of the
film, in a voice-over narration, that she has the gift of intuiting
what people want and need without it being said. She can be all things
to all people. And unfortunately for Julianne Moore's character, Chloe
is exactly right….just not in the way that you might initially think
she is.

What makes this movie good is that it has layers. Just as in real life,
people are inevitably much different than what they appear to be on the
surface. In a lesser film, the characters and plot would be
one-dimensional and by far less interesting.