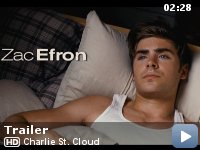 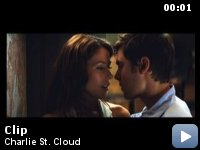 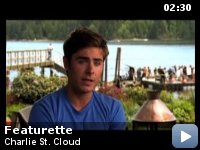 Charlie St. Cloud has been given the gift of seeing his deceased brother, but when a new love interest is in trouble he must choose between saving a life or continuing to see his brother everyday.

Storyline
Charlie St. Cloud is a young man overcome by grief at the death of his younger brother. So much so that he takes a job as caretaker of the cemetery in which his brother is buried. Charlie has a special lasting bond with his brother though, as he can see him. Charlie meets up with his brother (Sam) each night to play catch and talk. Then, a girl comes into Charlie's life and he must choose between keeping a promise he made to Sam, or going after the girl he loves

Taglines:
Life is for living

An open online casting call was held for the part of Sam St. Cloud.

Continuity:
Zac Efron had a mole on his left cheek removed after principal photography wrapped in October 2009. In May of 2010 he did a re-shoot of the scene where he shows Tess his new boat. The mole is present for the whole film, then disappears.

Sam St. Cloud:
God I hurt so much.
[Florio's flashlight shines near their car]

Charlie St. Cloud:
They're looking for us.

The St. Cloud Brothers In Life And Death


I was much moved by Charlie St. Cloud and by Zac Efron in the title
role. It looks like the young man is going out way beyond being a Walt
Disney bubblegum poster boy for pubescent young ladies.

When we first meet Efron in the title role he looks to be a young man
with a bright future. A scholarship to Stanford is his as he graduates
high school from his New England coastal town where he enjoys sailing
and the companionship of his younger brother Charles Tatan. The two are
rabid Red Sox fans as all New England kids are brought up to be.
Efron's boat is named the Splendid Splinter which everyone in New
England knows is the nickname of Ted Williams. Being much older than
Zac or his character, I actually remember seeing Ted play.

A cruel trick of fate puts the two of them in the path of an oncoming
drunk driver. Both die, but a determined paramedic played by Ray Liotta
brings Efron back.

As per an agreement they made minutes before the crash, Efron and Tatan
still meet in the woods every day to play catch and work on Tatan's
baseball skills. It's all Efron lives for. By some trick of fate he can
communicate and see Tatan, in fact he sees all kinds of dead folks
including a young man he graduated with from high school who was killed
in Iraq. Efron's forgotten Stanford and he now works at the local
graveyard, the better to be near the ones he identifies with.

I won't go into the rest except that Efron does learn to let the dead
bury the dead. Meeting up with Amanda Crew, another sailing enthusiast
does help. And Liotta now dying of cancer tells Zac that he was saved
for some special purpose.

Two great lessons of life are to be learned in Charlie St. Cloud. First
that we all have some kind of destiny, the trick is to find it and
recognize it. The second is that some people die young and maybe are
meant to so that the rest of us recognize how precious life is and not
to waste it. Having lost any number of people including a sister at a
young age, it's something that is always uppermost in my mind.

Charlie St. Cloud is beautifully filmed with some breathtaking sailing
sequences. The performers are flawless, especially Zac Efron. One thing
I will agree with other reviewers about is that I wish that the role of
the mother of the St. Cloud brothers played by Kim Basinger was more
fully developed. After the death of her younger son, she moves out of
town and you never really learn why.

Despite that minor criticism, Charlie St. Cloud is a moving film that
should be seen by all generations for the life lessons imparted.