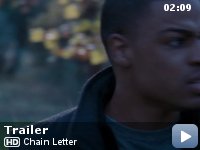 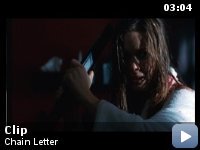 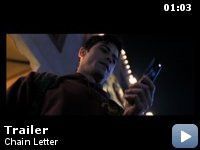 A maniac murders teens when they refuse to forward chain mail.

Storyline
A maniac murders teens when they refuse to forward chain mail.

Taglines:
If you don't forward it, you die

Betsy Russell, who plays Sergeant Hamill, was a featured character in the
Saw movie franchise. When the character Neil first receives the chain letter, the original 'Saw' is playing on his television in the background.

Continuity:
Detective Crenshaw has just been knocked out by the Chain man and is being drug across the floor. They pass by an empty cabinet/display by the wall and you can see Detective Crenshaw's hand place or move something into the cabinet. A couple of seconds later his hand moves back up to his waist, all while he is unconscious.


A chain letter is forwarded to a one kid online, he decides to forward
it to some of his friends. Those who forward the chain letter live,
those who don't die.

The film Chain Letter went wrong in many places, so many that it pains
me to write this review because that would mean I have to remember
parts of the movie. Here is a film so boring, unimaginative and down
right stupid that it almost doesn't qualify as a horror film. The one
and only thing the film has going for it are some gruesome death
scenes, yet even those aren't that great. So now that I have that one
and only positive out in the open, let me address the numerous issues
this film has.

For starters, the script. You should always start with the script, or
in this case, lack there of. Chain Letter has a simple premise. People
are dying because they don't forward a chain letter. Now, the direction
the film could have taken and if they did, would have made it a hundred
times more interesting, is a supernatural route. Instead, they went
with some cult route that has a killer, deemed The Chain Man, tracking
these kids down through technology and killing them with his chains. I
had a good laugh seeing this monster type on a laptop.

The story had some interesting bits to it that are only mentioned and
never explored. The cult of people who hate technology, is shown to us
at the last minute and we never get the chance to go deeper than that.
This part could have helped the film if they would actually pursue it,
but they thought it would be more interesting to bore the audience to
death. Both Keith David and Brad Dourif seem to be trying in their
poorly written and underused roles, but even they seem to know they are
in a stinker of a movie.

We never got the opportunity to like, or even hate the characters. I
would hope that the film would at least make some characters clichéd
enough to hate, but not here. These characters were so one dimensional
I was surprised they got actors at all. I don't remember a single
character from this movie, other than the detective and the teacher
(David and Dourif). Sadly the film is too boring to even remember
characters enough to hate.

There is no climax. The film has no rising action, it goes from one
kill to the next. There isn't even a main character. Once you think
it's the female, but then we end up spending more time with the
detective. The movie doesn't know who's who or where it wants to go.
It's a confusing mess, so much that we get to see the title sequence
TWICE. We literally get to see the title of the movie pop up in the
exact same manner twice. For what purpose? You either start with the
title, or end with the title and go to black. Don't do both, then have
a few minutes of random images afterwards. It makes no sense.

The writers, directors and producers have no idea what they were doing.
The movie is competently done, but what good is that? The only people
who seemed to know what they were doing were the special effects guys,
dishing out the blood. The Chain Man is forgettable, this movie is a
complete mess and I wouldn't even consider calling it a horror film.
Delete this Chain Letter and move on with your life.

TagsUSA
Welcome to the Rileys
Unstoppable