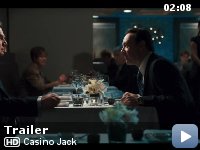 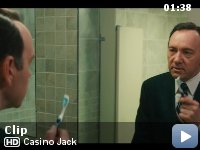 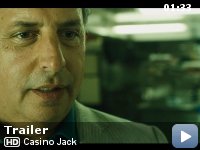 A hot shot Washington DC lobbyist and his protégé go down hard as their schemes to peddle influence lead to corruption and murder.

Storyline
A hot shot Washington DC lobbyist and his protégé go down hard as their schemes to peddle influence lead to corruption and murder.

Errors made by characters (possibly deliberate errors by the filmmakers):
When Jack is shown teaching screen-writing to fellow inmates, he has written on the board the film title 'Papillion' rather than 'Papillon'.

Jack Abramoff:
You know, I do a shitload of reading and studying and praying, and I've come to a few conclusions I want to share. People look at politicians and celebrities on the TV and the newspapers, glossy magazines – what do they see? "I'm just like them." That's what they say. "I'm special. I'm different. I could be any one of them." Well guess what, you can't. You know why? Cause in reality, mediocrity is where most people live. Mediocrity is the elephant in the room. It's ubiquitous. Mediocrity in your schools. It's in your dreams. It's in your family. And those of us who know this – those of us who understand the disease of the dull – we do something about it. We do more because we have to. The deck was always stacked against us. You're either a big leaguer, or you're a slave clawing your way onto the "C" train. Some people say Jack Abramoff moves too fast. Jack Abramoff cuts corners. Well, I say to them, if that's the difference between me and my family having the good life and walkin' and using the subway every day, then so be it. I will not allow my family to be slaves. I will not allow the world I touch to be vanilla. You say I'm selfish? Fuck you! I give back. I give back plenty. You say I – I got a big ego? Fuck you twice! I'm humbly grateful for the wonderful gift that I've received here in America the greatest country on this planet. I'm Jack Abramoff. And oh, yeah, I work out every day.


I confess to having followed Jack Abramoff's actual denouement years
ago only as much as I could tolerate without gagging. My feelings
toward lobbyists are mostly of disgust anyway. But to separate this
work of art from the morality of its subject matter, I must say that
this is a fine, fine film. Mr. Hickenlooper's death is a profound loss
to all of us. I find Kevin Spacey and Barry Pepper at the top of their
form here. The character and the situation give Spacey a broad stage to
display his talents and range. Abramoff is no easy character to portray
with any sympathy at all, and I had virtually none, but my outrage over
the facts didn't spoil my enjoyment of the entertainment one bit. A
tribute to all involved.


As far as the abuses portrayed, all I can say is, I really hope the
American citizenry somehow wakes up and unites to end the stranglehold
that cash has put on our democracy. The utter hypocrisy and
self-serving, greedy behavior of our politicians is harming us for
generations to come. If they truly love their country, they must reject
and expose lobbyists sacrificing our national welfare to Mammon.