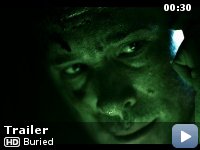 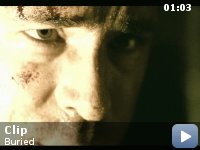 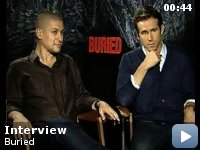 Paul is a U.S. truck driver working in Iraq. After an attack by a group of Iraqis he wakes to find he is buried alive inside a coffin. With only a lighter and a cell phone it's a race against time to escape this claustrophobic death trap.

Storyline
Waking groggy in pitch darkness, Paul Conroy, an American truck driver working in Iraq in 2006, slowly realizes he is trapped inside a wooden coffin, buried alive. With his cigarette lighter, he can see the trap he is in, and he quickly realizes that there's not enough air for him to live long. He finds within the coffin a working cellphone, which allows him contact with the outside world. But the outside world proves not to be very helpful at finding a man buried in a box in the middle of the Iraqi desert. Paul must rely on his best resource–himself.

Taglines:
Time is running out for Paul Conroy.

Ryan Reynolds is the only person we see in the flesh. All of the other performances are either voiceovers or recorded on his cell phone. The whole film is shot from the interior of the coffin. We never see the outside world. The film never repeats a single shot. These all make
Buried one of the most minimalist films ever made.

Continuity:
4 minutes before the phone gets changed from Arabic to English the battery status drops to two charge bars. Yet during the change it registers 3 charge bars. The next scene shows 2 charge bars again.

Paul Conroy:
Yea, you're a terrorist you son of a bitch

Jabir:
You terrified, so I'm terrorist.

An endless thrill ride, with one main actor.


I caught this gem at Sundance earlier in the year. It was part of the
'Park City at midnight' group of films, which showcased horror and
thriller movies, and played them at, can you guess? Midnight. I saw
Buried on the last night of the festival, Ryan Reynolds wasn't there,
but both the director and writer were. It was a small theater on Main
street, very artsy in it's look. But once the film started I had eyes
only for the screen.


It starts off with Ryan waking up, trapped in a box. A long box, the
length of a human body, buried deep beneath the ground. From there the
film plays out in an awe inspiring way, especially seeing as there's
only so much you can reveal from one location. The way Rodrigo Cortes
handled the filming is truly exceptional. From the start the camera
switches between closely claustrophobic, and flying high above Ryan,
showing the box with him inside and black all around. It's constantly
on the move just like our main character's thoughts. Diving in when the
action is intense, and then cutting to black when you don't think you
can take any more.

The pacing and plot of the film were nothing short of genius. And Chris
Sparling, the writer, should be commended for his work. He said after
the showing, that after having his scripts rejected for their cost of
locations he decided to go for a cheep but genius idea. One location,
one star, and a wealth of idea's. It makes a film like 'Salt' look like
a giant waste of resources, when Buried does what even some of the best
thrillers can't do, it brings us inside the character's head, and does
it all without a romp through the city, or blowing things up.

If you're one of those people who loves to sit on the edge of your
seat, chewing at your fingernails, while you're constantly asking
yourself what's going to happen next. Then by all means watch Buried,
and consider yourself lucky that you're not in his shoes…