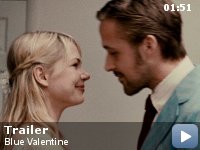 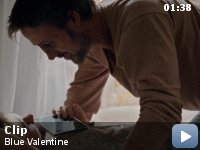 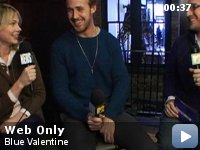 The film centers on a contemporary married couple, charting their evolution over a span of years by cross-cutting between time periods.

Storyline
Dean Pereira and Cindy Heller Pereira are a young, working class married couple – Dean currently working as a painter, and Cindy working as a nurse in a medical clinic – with a young daughter named Frankie. Despite their relatively tender ages, they are both ravaged by the life they've eked out together and by the experiences they've had leading into their marriage. Dean, a high school drop out, comes from a broken home, where he never really had a mother figure. He never saw himself getting married or having a family despite falling in love at first sight with Cindy. He doesn't have any professional ambition beyond his current work – which he enjoys since he feels he can knock off a beer at 8 o'clock in the morning without it affecting his work – although Cindy believes he has so much more potential in life. Cindy also comes from a dysfunctional family, with her own mother and father not setting an example of a harmonious married or family life…

When it came to casting Dean and Cindy's daughter, Derek Cianfrance asked Michelle Williams whether she could use her daughter Matilda to play the role. Williams considered briefly, but after noticing that the child's interest lies beyond acting (she was quoted that Matilda's main hobby was horse riding), Williams declined.

Anachronisms:
When Cindy is in the waiting room leaving the doctor's office after changing her mind, there is a brand new Ford SUV visible through the storefront window.


I am going to soap box it here for a second. The MPAA (those fine folk
who decide what rating a film will receive) ticks me off to no end.
Their system feels arbitrary, outdated, and stupid. You can only use
the "F" word once in the non literal sense and maintain a PG-13 rating.
Because that's the problem, kids hearing the "f" word too many times.
For want of any other description, it is terribly stupid.


Why do I bring this up? Well, because the film I watched tonight, a
powerful and incredibly touching film has been assigned an NC-17 rating
for a sex scene that is not erotic, not violent, not disturbing. It is
graphic, but more that that it is sad. Really sad. I'll talk more about
this later, but the idea that we have a system that gives "The Human
Centipede," "Hostel 1&2″ and all of the "Saw" movies an R rating
without a second thought gives this film an NC-17 stuns me. I honestly
cannot make sense of it. This is a beautiful, touching, and wonderfully
authentic film that deserves a shot at release. There is no logical way
a reasonable human being could say that this is less appropriate for a
teenager than any of those listed above. For some reason we think
graphic torture is fine, but sex and nudity will be the downfall of us
all.

My favorite poem is T.S. Eliot's "The Love Song of J. Alfred Prufrock."
I've always identified with it and I think it is one of the finest
pieces of writing ever produced. Specifically I am enamored with the
line, "Shall I, after tea and cake and ices have the strength to force
the situation to its crisis." This describes a situation most of us
have been in. You're in a relationship that is failing, you know it's
failing, the other person knows, your friends know, but it just hasn't
reached that crisis point that forces it to end. That is what this film
is about.

Most films center on the beginnings of a relationship (the honeymoon),
the middle (where things have reached a comfort point), or the divorce
proceedings, but you rarely get the moment when the relationship dies.
It's hard to present well and it's difficult to watch. This is what
happens when the things that were once funny and cute aren't funny or
cute anymore. We've all been there and it is painful.

If you think of a relationship as having a life then Blue Valentine is
that life at the moment of death where the life that is dying flashes
in front of your eyes. There is a combination of present time and
flashback showing how these two people came together and how the
inevitably fell apart.

Gossling and Williams are both superb in this film. He plays all the
clumsy sweetness and frustration of Dean perfectly, and she plays the
damage and need to be loved with a quiet power that is absent from most
performances today.

These are two people with a very idealized and romanticized view of
love. They view it as something that is there or it isn't. From their
backgrounds it is obvious why. Neither of them has any exposure to a
couple working at it, tending to the relationship. Things are good,
then they aren't. Williams character says early on, "How can you trust
your feelings when they can just disappear like that?" That is a
question that has plagued people as long as there have been
relationships. At some point your feelings will change and if you are
unequipped to change and grow with them, then any relationship is
destined to fail.

The two stories (falling in love and falling apart) are told in
intersecting circles. You see the beginning of the end, then you see
how they meet, you see the relationship deteriorate further, then you
see their amazing first date. This style allows you to see how they
fell in love with each other, but also showed the lack of foundation
the ultimately doomed them. Through most of the film it is obvious that
the only reason they stayed together as long as they did is because of
their daughter, and their absolute love for her.

Gosling as the devoted, hard working father is touching, Williams as
the overworked mother who seems to be raising her husband along with
her daughter is touching. The dynamic of goofy, doting father, and
concerned, loving mother is brilliantly played, and creates some
genuinely sweet and heartbreaking moments.

This is not an easy movie to watch. It's quite brutal, emotionally, at
times. The scene that earned the NC-17 is quite graphic. The two go
away to a romantic hotel for a night to try and rediscover something,
and end up in a graphic sex scene that is just hard to watch. It's not
as graphic as say "Monsters Ball," but there is a resistance by
Williams, followed by a resignation, she doesn't want to, but she'll do
it. It isn't violent, it isn't a glamorized rape scene, it's hard to
watch because it's just so sad. There is no way to deny that this is
the death of the relationship embodied in a single moment. He is still
infatuated with her, but she has moved on and there isn't any of the
old spark left.

While I did enjoy this film it is most definitely not something I would
watch often. It is good enough to deserve another view or two, but it
is just to heartbreaking. This script went through 66 drafts over 12
years and it shows in the attention to detail, the brilliant pacing,
and the way it allows a look and silence to speak volumes. This is a
well acted, solidly written and directed film that is well worth at
least one viewing, just be aware that it won't be an entirely pleasant
experience.