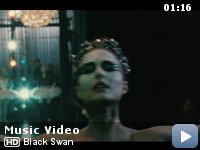 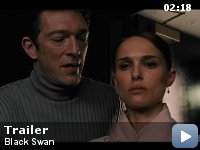 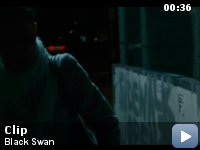 A ballet dancer wins the lead in "Swan Lake" and is perfect for the role of the delicate White Swan – Princess Odette – but slowly loses her mind as she becomes more and more like Odile, the Black Swan.

Storyline
Nina (Portman) is a ballerina in a New York City ballet company whose life, like all those in her profession, is completely consumed with dance. She lives with her obsessive former ballerina mother Erica (Hershey) who exerts a suffocating control over her. When artistic director Thomas Leroy (Cassel) decides to replace prima ballerina Beth MacIntyre (Ryder) for the opening production of their new season, Swan Lake, Nina is his first choice. But Nina has competition: a new dancer, Lily (Kunis), who impresses Leroy as well. Swan Lake requires a dancer who can play both the White Swan with innocence and grace, and the Black Swan, who represents guile and sensuality. Nina fits the White Swan role perfectly but Lily is the personification of the Black Swan. As the two young dancers expand their rivalry into a twisted friendship, Nina begins to get more in touch with her dark side – a recklessness that threatens to destroy her.

Other dancers seen in the film are members of the Pennsylvania Ballet Company. The movie was shot in Purchase, NY, during January 2010, when the company was not performing elsewhere.

Nina Sayers:
I had the craziest dream last night. I was dancing the White Swan.

A beautiful and nightmarish masterpiece


There are not enough words in the English language to describe the
praise Darren Aronofsky deserves for Black Swan. It was one of the most
talked about and sought after films at this year's Toronto
International Film Festival (which I managed to snag a ticket for), and
for good reason – it is a masterpiece that is just as much beautiful as
it is nightmarish.


Nina Sayers (Natalie Portman) has toiled for years within a New York
ballet company, always pushing herself. The company has fallen under
hard times, and director Thomas Leroy (Vincent Cassel) makes the swift
decision to put on a new rendition of the classic Swan Lake. With the
company's go-to lead pushed into retirement, Nina is quickly selected
to be the lead in the new ballet. With competition arriving in the form
of new dancer Lily (Mila Kunis), and the demanding desire for
perfection from both Thomas and her overbearing mother Erica (Barbara
Hershey), Nina begins a journey into dark uncharted territory.

Black Swan is an enthralling and visceral experience from beginning to
end. Aronofsky has used what he has learned from making the raw and
unflinching The Wrestler and the cerebral horror and incredibly
disturbing Requiem for a Dream, and has crafted a film that you will
simply not be able to take your eyes off of. He builds up rather slow,
but right after that first moment of off-the-rails insanity, he
delivers one hell of an incredible piece of cinema. One that is not
easily able to be classified to any one genre.

While you may have read suggestions that Black Swan and The Wrestler
are two halves of the same film, make no mistake at looking at it any
further beyond the comparison of being about two people toiling within
two very different forms of art. Black Swan is never a low budget
character piece. It is a film that navigates between being thrilling
and horrific at the same time. While the horror elements start to take
more prominence in the second half (specifically the rather squeamish
elements of body horror, done in a way that would make David Cronenberg
proud), the film never lets one completely overtake the other. It
manages to maintain this sense of dread, darkness and rather graphic
wound/injury infliction throughout.

The visuals and editing are the drive of what helps make the film so
well done. Contrasting blacks and whites so frequently give the obvious
hints of good and evil, innocence and darkness. But Aronofsky likes to
throw in hints of ambiguity at every turn, changing the colours for
each character depending on the scene, and depending on what they may
or may not be doing. Even the scenery and set design is in plain black
and whites, always making the audience guess the true motivations and
intentions of both character and creator. Adding in the element of
reflection, both in others and the self (mostly through mirrors), only
helps compound these feelings of ambiguity and confusion. It will
consistently keep audiences thinking about what is being shown and what
is actually going on. The subtle visual effects and astoundingly well
done score only help add to the greatness.

Aronofsky also deserves recognition for the film's lean running time.
When so many films are often far too long and dragged out, this film
maintains a sense of momentum that never gets lost at any point. The
film's slow points are never dragged out, merely well padded out for
the shift from Nina being innocent to adrenaline soaked horror as she
descends into the realm of darkness. Rather gracefully, Aronofsky
manages to balance the goal of Mark Heyman, Andres Heinz and John
McLaughlin's script to blend Nina's tale with the story of Swan Lake
itself, and never loses sight or direction at any instance. This is
bravado style filmmaking at its finest, and more than suggests that the
brilliant direction in Requiem for a Dream was not a fluke.

Portman, who has shown her acting merits before in the likes of Closer,
delivers a startlingly intense and beautiful performance as Nina. At
once you can see the innocent, sexually repressed little girl who just
wants to please her mother, and the sexually depraved fallen angel,
inching closer towards independence and adulthood. She is very clearly
not "well" in the beginning of the film, and as the film progresses,
you can practically chart her 180-degree reversal in character. She is
downright terrifying in many instances, and more than proves her worth
as an actress. When she finally dons makeup late in the film, her
transformation from a once promising talent to a full blown powerhouse
talent becomes simply marvelous to watch.

The supporting cast only helps to further complement Portman's
extraordinary performance. Cassel is amazing as always as the slimy and
twisted Thomas. We never really get more than hints at his true
intentions, but Cassel makes every moment on-screen simply amazing.
Kunis delivers a level of depth I never thought was possible for her.
She commands the screen with every new scene, and this performance will
easily act as a starmaking role for her. Hershey is even better;
practically stealing the screen away from Portman's magnetizing
performance. She makes Erica into that monster of a character everyone
loves to hate, and brings a level of intensity to every mere moment she
appears in. If anyone is even nearly close to equaling Portman's
performance, it would be her. Despite only appearing for a few minutes,
Winona Ryder is amazing in her role as the former lead ballerina Beth.
I just wish she could have chewed up more scenery.

Black Swan is an incredible film from beginning to end, and will not
easily leave you. It is a masterpiece of unheralded success, and is
easily the best film I saw at TIFF. Watch out for it at Oscar time – it
just may steal the show.