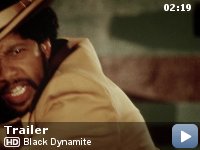 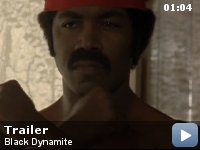 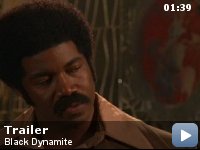 Black Dynamite is the greatest African-American action star of the 1970s. When his only brother is killed by The Man it's up to him to find justice.

Storyline
This is the story of 1970s African-American action legend Black Dynamite. The Man killed his brother, pumped heroin into local orphanages, and flooded the ghetto with adulterated malt liquor. Black Dynamite was the one hero willing to fight The Man all the way from the blood-soaked city streets to the hallowed halls of the Honky House..

The boom microphone is visible several times on the top of the frame. Usually if a boom mike is visible in a finished film, it is either because of a mistake made by the filmmakers during shooting or (much more frequently) a mistake made by the projectionist at the movie theater – but in the case of this movie, the mike being visible is a joke meant to parody the lack of film production expertise on the sets of the original "blaxploitation" movies that this movie is referencing.

Incorrectly regarded as goofs:
When Black Dynamite is talking to Honey Bee, a tear running down Honey Bee's face disappears and reappears from shot to shot. This is deliberately mocking the lack of continuity shown by many of the movies that this film parodies.

Black Dynamite:
Scram. Scram! I said split! Shake the scene you turkeys! Get out of my house! I'll see you all tomorrow.


This film reduced me to tears of laughter. I've just returned home from
seeing it at the Edinburgh film festival and can honestly say this is
one of the best movies i've seen this year. I could just list all of
the best bits of the movie in this review, but i'd rather you all just
went to see it for yourselves.

As a parody/homage of the blaxploitation movies of the 70's, this is
perfect. If I didn't know better, i'd think this was actually made in
the 70's. Its full of cool little details, the decor, the fashion, the
hair styles, the Isaac Hayes/Curtis mayfield style music that details
the plot in the lyrics (sometimes scene specific), the grainy picture
and the intentionally dodgy camera-work, crash zooms, boom mics in shot
etc. During the fight scenes, Michael jai white's kung fu yell is a
spot on impersonation of Jim Kelly's (he of Enter the Dragon fame).

Like all the best spoofs, all the actors play it completely straight.
White is perfectly cast as Black Dynamite, and if there is any justice
in the world, this movie will make him a star. I can almost imagine
Samuel L playing this part, but I doubt he could have played it as well
as white did. The scene that crystallised his performance for me, was
when, during a long speech, a boom mic pops in to shot right next to
his face. During the scene, the cameraman is continually trying to
adjust the shot to hide the mic. Dynamite continues with his speech as
if nothing is going on, but just before he is finished talking, he
quickly glances at it, then finishes his speech. The way he plays it is
perfect and had everyone in the cinema in fits of laughter.

I said earlier that this is the best spoof since airplane, but I
actually think this may be better. In airplane, the jokes were
quickfire, but hit and miss, but in black dynamite, every joke hits its
mark, and its just as quickfire as airplane. The tone is set pretty
quick ( when an undercover agent is caught out cos he cant talk jive
properly) and doesn't let up until the credits have rolled. I was still
laughing hours after I left the cinema just thinking about it.

Watching this made me wonder how the Austin powers films were such big
hits. They were a similar kind of parody but nowhere near as funny, and
at the end of the day, aside from a couple of amusing cameos, a one man
show (and not a very good one at that). If this doesn't at least do
Austin powers numbers, I will be very disappointed, as it deserves the
success. Very rarely does a film make me laugh so hard I cry, and this
movie did it several times, and its not just me, I think everyone in
the cinema had the same experience. Go and see this first chance you
get, I cant recommend it enough.