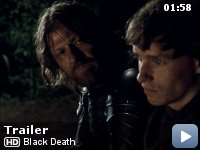 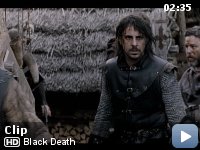 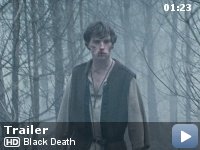 Set during the time of the first outbreak of bubonic plague in England, a young monk is tasked with learning the truth about reports of people being brought back to life in a small village.

Storyline
Set during the time of the first outbreak of bubonic plague in England, a young monk is tasked with learning the truth about reports of people being brought back to life, a mission that pulls him toward a village ruler who has made a dark pact with evil forces.

Taglines:
In an age of darkness one man will face the ultimate battle against evil.

John Lynch and Andy Nyman have previously worked on
The Tournament together.

Factual errors:
When Ulrich and party come across a group of villagers about to execute a suspected witch in the forest, she is tied to a ladder, which is consistent with witch executions in Germany, where the movie was filmed (the ladder would be tipped backward into a bonfire). In England, where the film is supposed to take place, a suspected witch would be tied to an upright stake and set aflame directly.

Wolfstan:
The fumes of the dead are in the air like poison. The plague, more cruel and more pitiless than war, descended upon us. A pestilence, that would leave half of our kingdom dead. Where did it come from? What carried its germ. The priests told us it was God's punishment. For what sin? What commandment must we break that could earn this? No, we knew the truth. This was not God's work, but devilry. Or witchcraft. But our task, to hunt down a demon, was God's cure.

"We journey into Hell… But God travels with us."


Set during the period of English history when the Bubonic plague
spreads death across the land, a troubled young monk named Osmund is
recruited by a band of soldiers to investigate a village that remains
untouched. What they find there will change them forever.

Having enjoyed Christopher Smith's previous movies ("Creep",
"Severance" and "Triangle"), I had high hopes for "Black Death" and was
not disappointed. Although the gore of his previous movies is still
evident during the battle scenes in which arms are severed by swords
and heads crushed by maces, it's largely underplayed here with the
script placing greater emphasis on the story's themes of faith,
religion, superstition and love. It is this emphasis, along with the
various twists in the plot, which make the choices faced by the
characters in the third act of the movie so very interesting.

I was repeatedly reminded of the original "Wicker Man" whilst watching
"Black Death", not only because of the central theme of a devout
Christian confronting something terrible which attempts to challenge
and undermine his own beliefs, but also because of the cold, bleak
cinematography reminiscent of a seventies horror movie. The entire
production is nicely directed and Smith utilises his horror knowledge
to keep a constant and oppressive threat running throughout the film,
regardless of the scene, to maximum effect. The visual effects, whether
for the symptoms of the plague itself or for the various wounds
suffered by the characters, are also excellent.

The cast are universally fantastic, although Sean Bean's towering
performance – portraying the leader of the soldiers and a man "more
dangerous than pestilence" – steals the movie. Eddie Redmayne does well
in the central role of Osmund and manages to make his character's
personal journey both interesting and believable, whilst Carice van
Houten is also memorable in an important role during the second half of
the movie.

I was very impressed by "Black Death" and would recommend it to those
who enjoy atmospheric horror movies such as the aforementioned "The
Wicker Man" or "Don't Look Now", as well as those who seek out movies
set in or around this period of Britain such as "In The Name Of The
Rose" and "The Reckoning". Although parts are grim and even upsetting,
it's never dull and is definitely a movie worthy of your time and
support.