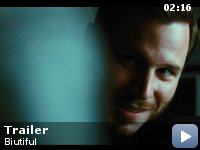 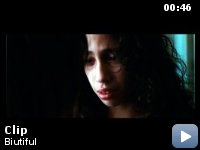 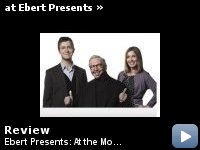 This is the story of Uxbal, a man living in this world, but able to see his death, which guides his every move.

Storyline
Uxbal, single father of two children, finds his life in chaos as he is forced to deal with his life in order to escape the heat of crime in underground Barcelona, to break with the love for the divorced, manic depressive, abusive mother of his children and to regain spiritual insight in his life as he is diagnosed with terminal cancer.

Continuity:
In the scene where there are three dead boys lying, the hands of the middle boy changes in between shots.

Ana:
Dad! How do you spell "beautiful"?


Biutiful is a rather complex and interesting film, one that I have to
admit is still sinking in as I'm still piecing together the dots of a
rather sprawling storyline. Biutiful is a film that exists within the
margins of society, it's everywhere we don't want to live, it's
everyone we don't want to meet; it's all the struggles we'd rather not
face and then some. As a result, the film is loud, violent, crazy,
shameful, desperate, dirty and all other manner of words that describe
the run down storefronts and apartments of the worst lived areas.
Intelligently and bravely the films central idea is lost in the crowd,
as obscured as the desires of its inhabitants, it's a confusing and
chaotic place to be, but it works here where it wouldn't elsewhere. I
would really like to watch this one again in hopes of better connecting
the dots of a life lived on the fringe of society, entrenched in wrong
doing, but not without its struggle with sensible moral. I think the
idea behind Biutiful is that life, no matter how destitute and
forgotten can be beautiful, it all depends on how you except and claim
it.


Biutiful is the story of Uxbal, a shady man who's life is filled with
turmoil, from admissions of an uncared for terminal illness, to
unstable lovers, to unruly children, to spirits of which he can
commune, to the lives of the underpaid migrant workers that he pimps
out to whoever will employ them. It's easy for Uxbal to look back on
his forty year existence and measure it in disappointments. But Uxbal
is also a sensitive and caring man, who is able to make these
admissions and in doing so take the steps to make his life it's own
unique form of biutiful, but with a city more a crumbling metropolis
and people who bar his progress with any step, can Uxbal truly bring
some semblance of beauty to his life before it is painfully cut short,
or will the darkness and depravity of the world around him swallow him
and his desires whole, the answer is well worth discovering.

So I just can't say a whole lot with one viewing, but there are some
things that stand out immediately. The film is several things, sad,
funny, scary, creepy, intense, and as obvious as it seems, beautiful.
Definitely some of the nicest camera work this year, yes it's sometimes
shaky but you must consider the imagery it captures; some scenes are
purely blissful for a film fan to witness. The editing is so great here
that even though you know where the film is going its still exciting to
get there. Javier Bardem gives a brilliant performance here, and it
will take awhile for the viewer to except that Uxbal is an undesirable,
but once you allow yourself to slip into his shoes, you begin to really
get a sense of the man and his life. The seediness of the streets, and
the strife and struggle of the humans in them are written all over this
man, and Bardem really gives himself over to this character, warts and
all, and gives us a brilliantly flawed person worthy of our attention.
The rest of the cast is also well played, their stories contain their
own levels of thoughtfulness and intrigue that both separates and
connects to and from our protagonist intelligently. The script feels
very human, there are no major verses of dialogue, people talk, feel
and behave very naturally in this film, despite all coming from
abnormal situations. Virtually no exposition on why this film exists,
its meaning is wonderfully felt but not fully explained. The direction
is so subtly smart that I was surprised to miss some of the most
inventive and thought provoking foreshadowing I've seen in a film.
Really just an all out creative and arresting affair, I'm trying hard
not to use the word beautiful, but its fits every gritty frame of this
film. The cinematography is awesome, really blown away thinking back to
the brilliance of some of these shots, great work with the actors and
the environments. My only complaint is that sound editing got a little
to jarring, I get it's supposed to be an ugly film, but high pitched
beeps and boops are annoying anyway you cut it (the 2001 monolith can
suck it, thanks Kubrick), it drives home the madness of the setting,
but I actually covered my ears at one point to muffle the noise. Other
than that, the film is wildly challenging and rewarding for the viewer,
I am blown away by the artistry here, it took this film to great
heights, it made ugly pretty, which is no easy feat. If you don't like
your films themes to be cut and dried, you're going to want to check
out, pick apart and decipher the themes and mysteries of Biutiful, as
it is more than deserving of such treatment.

So yes I liked this film quite a bit, but will hasten to rave until
I've fully understood the motive of it. Thematically it's no
straightforward story, there's something deep underneath all the grime,
and I'm glad I dirtied my hands on it, and can't wait to do so again. A
film for those who love long walks on the wild side and never choose
the easy way out; a real decent thinking persons movie. A film in a
class of it's own that breaks conventions in the best ways possible,
and definitely among the years best films that I've seen thus far.
Recommended.