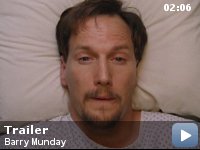 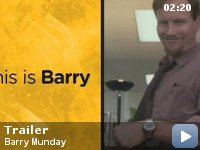 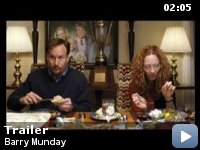 Barry Munday wakes up after being attacked to realize that he's missing his family jewels. To make matters worse, he learns he's facing a paternity lawsuit filed by a woman he can't remember having sex with.

Storyline
Barry Munday wakes up after being attacked to realize that he's missing his family jewels. To make matters worse, he learns he's facing a paternity lawsuit filed by a woman he can't remember having sex with.

Revealing mistakes:
When Barry and Ginger are having sex, Barry points out a smiley face tattoo that Ginger has on her left leg, which Ginger said she got in college. But in a previous scene, before Ginger was to give birth, there is a clear shot of her left leg and no sign of any tattoo.

Ginger Farley:
Are you afraid of my family?

Barry Munday:
Yes, each one of them individually and as a group.

'Barry Munday' is a surprisingly poignant and introspective comedy


In this comedy directed by Chris D'Arienzo based on the novel Life is a
Strange Place by Frank Turner Hollon, Patrick Wilson plays Barry
Munday, a suburban wanna-be ladies man, who makes up in the hospital
with both of his testicles gone after being attacked in a movie theater
for hitting on the wrong girl. To make matters worse, a paternity
lawsuit is filed by a woman he can't remember having sex with.
Realizing this being his last chance to ever be a father, Barry decides
to take on the responsibility on being a good father.

My initial impression of the concept of this film was that this film
could either be a feminist revenge fantasy or a raunchy comedy.
Thankfully, this film was neither of those, but turned out to be a
surprisingly poignant little comedy, with a honest, introspective look
at what being a man entails beyond having the body parts, if you will.
Given it's a comedy, there were many predictable directions this film
could have taken at the expense of Patrick Wilson's character, Barry.
Surprisingly, the film avoids the obvious and portrays Barry in a
sympathetic and real way. Barry starts off as an irresponsible loafer,
whose main interest involve bedding women, who soon after loses his
most prized asset and what he feels makes him a man. He goes through a
slump until he finds out that someone may actually be carrying his
child (from a previous fling he had no recollection of). In a sense, he
realizes being a father may be the only thing left that connects him to
his manhood.

Barry meets the mother of the child, Ginger Farley (Judy Greer), who
isn't particularly a looker, to put it nicely. Her parents, Mr. and
Mrs. Farley, as played by Cybill Shepherd and Malcolm McDowell, seem to
agree that Ginger hadn't quite lived up to their expectations, in
beauty and otherwise, unlike their model daughter, Jennifer (Chloë
Sevigny). There's noticeably a bit of a sibling rivalry between Ginger
and Jennifer. As we get to know the characters, we see personal baggage
behind both Ginger and Barry which perhaps contributed much in how they
viewed themselves and their lifestyle. With Ginger full of bitterness
and resentment toward Barry, the relationship between Barry and Ginger
is often awkward and comic as Barry is honestly trying to know her
better for the first time. Advertisement

Patrick Wilson (Watchmen) is close to perfect in the role of Barry,
where he deftly milks the comic aspects of his shallow character as
well as his eventual change to a deeper, sympathetic, and more serious
side. Judy Greer plays the awkward Ginger Farley with caustic wit and
consistency. Cybill Shepherd and Malcolm McDowell in their supporting
roles as Ginger's parents, the Farleys, turn in expectedly seasoned
performances. Bill Dee Williams (do I even have to mention Empire
Strikes Back?) is his usual charming self as Barry's Delorean-driving
boss, who happens to be close to the Farleys. Jean Smart is great as
the blunt, yet sharp-minded, Carol Munday, Barry's mother.

This independent film marks Chris D' Arienzo's directorial debut and it
is a strong one. The comedy feels natural because it's fairly close to
life for the most part. The emotions of the characters feel genuine. It
is unexpectedly touching. Patrick Wilson does great work in his role as
the titular character. It's not what I would call a laugh-a-minute
comedy, but a deeper, thoughtful film that happens to have much
comedy—usually the type of films I gravitate toward. This film left me
with some thoughts long afterwards, which says a lot about a comedy,
let alone any film.

For more of my movie reviews, you can also follow me at
Tweets by d_art