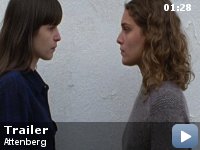 Stuck in her boring factory town, 23-year-old Marina is at the mercy of both her father's impending death and her distaste for other human beings.

Storyline
Stuck in her boring factory town, 23-year-old Marina is at the mercy of both her father's impending death and her distaste for other human beings.

An intriguing, but ultimately unsatisfying study of the human condition

I'd heard nothing about ATTENBERG until I picked up a review booklet in
the local indie cinema in my town and was intrigued by the premise.
It's difficult to explain the story as such because this isn't really a
story piece, but more of a study in character and relationships, and
the human condition.

As a character study the film-makers perhaps deliberately draw
parallels with nature documentaries which observe animal behaviour
without really making any emotional connection between man and beast.
The film draws attention to this – as the main character Marina, played
here by Ariana Labed, watches Sir David Attenborough on TV describing
his experience of coming face to face with a gorilla. He sees it as a
connection with nature like no other he has experienced.

Marina herself realises that there is no emotional content in her life,
no connection with those around her. Her candid questioning of her
father's sexuality and the off-hand conversation about the process of
cremation after his death lays bare the emotional desert that she
exists in. Her cold relationship with best friend Bella, and Bella's
clumsy attempts to set alight the fires of sexual yearning in Marina
further show that she (Marina) is spiritually, emotionally empty.

Even her attempts – ultimately successful – to lose her virginity to
the nameless engineer she drives to and from work each day in her job
as a taxi driver are emotionless, cold, stark. She describes each stage
of their tenderness, each aspect of love-making stripping it of any
feeling, warmth, humanity.

Marina is played brilliantly by Ariana Labed, who hides behind a
stillness in both her face and eyes, barely revealing anything except
in the strange dances with Bella. Evangelia Randou succeeds in bringing
darkness to Bella. She is unhindered by thoughts of feeling and
emotion, tenderness and love and in every respect she plays the darker,
animalistic side to Marina. It was easy to think for the first act that
Bella was not a real character but a shadow side to Marina, satisfying
the hidden fantasises Marina has, about sex and even, in a Freudian
twist, about her own father.

Marina almost gets there but the death of her father, the functional
process of packing him off to Germany to be cremated (cremation is
legal in Greece and has been since 2006, but is still frowned upon by
the Orthodox Christian church there) pulls her back into a world that
is hard and cold and stark. She stands and watches his coffin packaged,
x-rayed for the flight, marked with "THIS WAY UP" stickers like some
Amazon or eBay parcel.

There is a moment of feeling as she chases briefly after the pick up
that takes him to the plane but in the end the film pulls back from
allowing the character the emotional epiphany it has been building to.
She scatters his ashes into the sea, driven there by Bella, clothed in
a functional visibility jacket and struggling to prise off the lid from
the urn. There seems to be no feeling, except maybe disappointment that
there is no deeper feeling as the waves wash him away. Marina has not
opened the door to love, feeling, loss, emotion.

And it's this that I struggled with in the film. What it said to me was
that humans can be really no different from animals, going through the
day by day business of survival. It shows people in all their
functional purpose – working, eating, dying. It doesn't hold back from
showing it's characters naked, like the apes in the jungle.

There is a notion in this that we have a reservoir of compassion and
love, and a whole glut of deeper emotions to give but that it remains
untapped; and that we are perhaps trapped by our circumstance and
surroundings and past and thus prevented from expressing our true
selves.

Our characters live in a rundown industrial town, and the story itself
was written against the backdrop of riots in Greece at austerity
measures and economic crisis. The film-makers and writers are asking:
Is this all we are? Industry? Economy? Money? Simple black and white
things? Or is there something else.

But they never answer the question for Marina and her plight is left
unresolved, unsatisfied.

The cinematography in the film – by Thimios Bakatakis – is beautiful,
still. It is a series of tableau into which movement sometimes
intrudes, the emotions stirring the mind.

But ultimately it is the failure to resolve Marina's dilemma that
leaves the film missing that final piece of the jigsaw that would have
made it an art-house classic.

TagsGreece
Beautiful Lies
The Chronicles of Narnia: The Voyage of the Dawn Treader