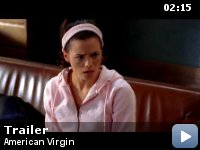 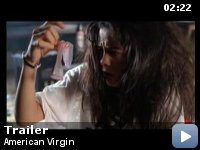 Storyline
A Freshman College Girl on a scholarship from an abstinence group that advocates saving sex until marriage discovers that her antics on a night of debauchery, when she reluctantly got drunk for the first time in her life, were captured on camera by a sleazy video producer. Now she and her friends must travel across country to recover the incriminating footage.

Jeff Seeman's script was originally called 'Mardi Gras' and took place in New Orleans. Picture was shot under the title 'Virgin on Bourbon Street', then changed to 'American Virgin' because the locale was switched to Detroit.


…at least if Disney movies contained lots of topless nudity.

The plot: A girl (Jenna Dewan), who has devoted her life to chastity
and following rules, goes to college on scholarship from an
organization that promotes celibacy. She inadvertently gets drunk at a
party and is filmed topless by "Chicks Go Crazy" (this movie's
fictional version of "Girls Gone Wild"). She and her new-found college
friends embark on a journey to save her reputation and her scholarship
by getting the footage back. Along the way she learns lots of lessons
about life and love, and we see a lot of breasts.


Although it has lots of (attempted) college humor, the storyline is
that of a typical formulaic teen movie, complete with morals and cliché
moments. Sometimes it's rather painful. One scene in particular stands
out in my mind, where the main character and a guy who's falling in
love with her are listening to the radio and actually break out into
song (clearly lip-syncing with prerecorded voices). Reminded me of
Aladdin ("A Whole New World").

I think what annoyed me most was the background music, which is cornily
reminiscent of typical family films ("Honey I Shrunk the Kids" came to
mind specifically, for some reason). I've never seen a film that
contained so much adult content and yet felt so geared towards being a
family movie. I really don't know who this movie was made for. On the
one hand, the story is so fluffy it seems like pubescent girls were the
target demographic. On the other hand there's the raunchy college humor
and frequent nudity. So I'm not really sure who they were hoping this
would appeal to.

As a late edit to this comment: I wanted to mention one positive aspect
of this film, and that is its message regarding "Girls Gone Wild",
which was aimed perhaps at those girls who value that kind of
attention. The message is delivered in true teen cliché fashion, but
nevertheless, it is a decent message that I haven't seen mentioned
before.