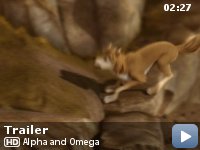 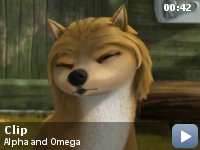 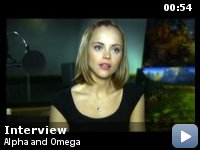 Two young wolves at opposite ends of their pack's social order are thrown together into a foreign land and need each other to return home, but love complicates everything.

Storyline
In Jasper National Park, the wolves, Kate and Humphrey, have known each other since puppyhood, but they are on the oppose ends of the Western Pack's social structure with Kate as the energetic Alpha daughter of the pack leader and Humphrey being the good humoured Omega. That social structure forces Kate to accept an arranged marriage with Garth of the Eastern Pack to unite the packs for peace, regardless of Humphrey's hopeless attraction for her. Before that union can occur, Kate and Humphrey are captured by the park's rangers and sent to an Idaho park as part of a wolf repopulation project. Mindful of her duties, Kate is determined to return to Jasper and Humphrey offers to help with the assistance of two odd geese. However, as this disparate pair struggle through the dangers to get home, a growing mutual appreciation of their talents and then a deeper love threatens to disastrously complicate everything if they make it back.

Continuity:
When Humphrey is water-skiing on the river while being pulled by Marcel, Kate is on the right bank. After Humphrey gets launched into the air and tries to use Marcel's wings to fly back to the ground, they land on the left side of the river. Kate appears right above them. She was on the other side of the river, and she doesn't appear to have swum.

Garth:
Here, maybe this'll help.
[pushes the fur out of her eyes]

Garth:
Your eyes, they're beautiful.

"Alpha and Omega" Follows the Pack


"Alpha and Omega" is your standard kiddy flick of conflict and
resolution with much detail to the 3D imagery and not enough to keep
Mom and Dad entertained. The story brings nothing new to the party;
it's like the friend that you invite and tell him to bring a side dish.
"Toy Story 3" spends all night baking cookies for everyone. "Despicable
Me" puts forth an effort by bringing barbecue weenies in a Crock Pot.
"How to Train Your Dragon" takes the time and mixes 7-Up and punch.
Then there is "Alpha and Omega," who stops at the local gas station and
picks up a fun sized bag of Doritos for itself and arrives 30 minutes
late.


The story begins by introducing us to the main characters, Humphrey
(voiced by Justin Long, the guy from the Apple commercials) as the
Omega wolf and Kate (voiced by Hayden Panettiere from "Heroes"), as the
Alpha wolf. They are acquaintances at the beginning of the movie, where
it is hinted at that Humphrey has a crush on Kate. After a winter at
Alpha school Kate is being trained to become a leader of the pack and
Humphrey is still palling around with his knucklehead friends.

Humphrey and Kate's wolf pack has a rival pack that is trying to take
the caribou hunting from them. That doesn't fare well with Winston
(voiced by Danny Glover) who is not only the leader of the pack but
also Kate's father. And, who is the leader of the rival pack? It's Tony
(voiced by Dennis Hopper, in his last film), who has some unexplained
history with Winston. Tony. Really? This great wolf is the leader, the
old wise sage, and that's the best name they could come up with? Tony
the Wolf. Sounds too much like Tony the Tiger.

Humphrey is in love with Kate but she is arranged to be courted by the
rival pack's Alpha male, Garth. The packs have a ritual where the
adolescents meet at a mountain in Jasper National Park to howl at the
moon. It's comparable to going to a junior high dance at the taxidermy
display inside a Cabela's. There was a song and dance element here that
felt out of place. I felt uncomfortable to see these wolves dance
seductively together in a kid's film. At that point, I understood why
wolves chewed off their own leg when caught in a trap.

At the "howling" Humphrey and Kate are hit with a dart gun and
transported from their park in Canada to a park in Idaho. Here they are
set free and it's up to them to find a way back home.

The couple is eventually befriended by Marcel, some sort of a cross
between a Canadian goose and either a bald eagle or a vulture (I
couldn't tell) and his side kick Paddy, a yellow duck. These two birds
are avid golfers. Hitting the golf ball gives the movie a reason to
exploit their 3D technology. Hey, you paid for it; you might as well
use it, right guys?

Marcel and Paddy keep showing up during the movie to act as guides for
Humphrey and Kate. It's not fully explained how these four keep running
into each other but it just so happens that they always show up at the
right time.

The rest of the picture is about how Humphrey and Kate work as a team
to get back home while realizing an Alpha and Omega wolf can have deep
feelings for each other.

Should you see this movie? Nope. It was trying to be kiddy movie with
goofy elements of bathroom humor and at the same time a movie with
adult themes about falling in love.

The 3D action sequences were well done. There were several scenes of
Humphrey finding old trees to slide down hills and incorporate the
first and second person angles of sliding. And, as my 11-year-old
daughter pointed out, whenever these wolves needed an old tree to use
as a sled it just so happened to be within reaching distance. How many
dead trees are there in a forest?

If you absolutely feel that you still need to go, bring your kids if
they are under the age of 10 and if they have very little imagination
on their own. Or just wait until it's out on DVD because after you
spend $10 each you won't be howling with excitement, it will be more of
a whimper.