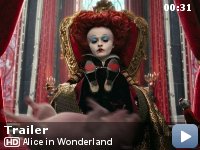 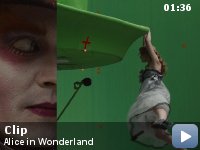 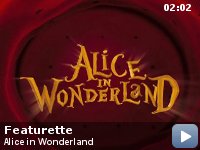 19-year-old Alice returns to the magical world from her childhood adventure, where she reunites with her old friends and learns of her true destiny: to end the Red Queen's reign of terror.

Storyline
Alice, an unpretentious and individual 19-year-old, is betrothed to a dunce of an English nobleman. At her engagement party, she escapes the crowd to consider whether to go through with the marriage and falls down a hole in the garden after spotting an unusual rabbit. Arriving in a strange and surreal place called "Underland," she finds herself in a world that resembles the nightmares she had as a child, filled with talking animals, villainous queens and knights, and frumious bandersnatches. Alice realizes that she is there for a reason–to conquer the horrific Jabberwocky and restore the rightful queen to her throne.

The Mad Hatter asks Alice several times, "Why is a raven like a writing desk?" This is directly from Lewis Carroll's "Alice's Adventures in Wonderland." Carroll admitted that there never was an answer to the question; he made it up without an answer. He did provide one possible answer years later after many requests from his fans for the answer: "Because it can produce a few notes, tho they are VERY flat; and it is nevar put with the wrong end in front." ("Nevar" = "Raven" spelled backwards. Carroll's deliberate misspelling is often erroneously "corrected", obscuring the point of the joke.) Another answer, from the American puzzler Sam Loyd: "Because Edgar Allan Poe wrote on both." Over the years, numerous others have come up with possible answers as well.

Revealing mistakes:
When Bayard meets the White Queen, after he left Alice at the Red Queen's castle, she pets him, but the shadow of her hand doesn't meet the shadow of the dog.

Lord Ascot:
Charles, you have lost your senses? This picture is impossible.

Charles Kingsleigh:
Precisely. Gentlemen, the only way to achieve the impossible, is to believe it's possible.


I attended the Cast and Crew screening on Sunday, in Leicester Square,
with high hopes for this film as it's without doubt the most exciting
job I've had. This was my first feature experience, and working for Tim
Burton was a hell of a way to start.


But, even as someone with a lot of time for his films, and a
pre-existing bias, I couldn't really connect with this. The cast acquit
themselves well, especially considering the noted difficulty in emoting
to a tennis ball on a stick, but all their tics and quirks seem to be
masking a void at the centre of what should be a free-floating,
evocative trip. Sure, it's weird looking, but we've seen it before, and
back then in films like Edward Scissorhands it had a sense of purpose.
Now we're left exploring a CGI wonderland that seems to be without a
great deal of wonder. The book revels in its bizarre environs, absurd
dialogue and whimsical characters. This film grounds them, drains them
of that mystery and leaves us with a colourful but forgettable retread.
It seems intent on driving us to a narrative conclusion that few people
will have had much stake in through its running time, simply because
we're not giving much to care for.

With a source material so familiar, even to those whose knowledge is
second hand references, there needs to be a degree of innovation (as in
Svenkmejer's dark stop-motion version, or the co-opting of Terry
Gilliam in to his "Tideland" narrative), or else a studious and
inspired adaptation that completely returns to Lewis Carroll. What we
end up with is a mid-point that fails to get to grips with what
enchants people about the Alice story, and another chance to see a
beautiful waif walk around twisted, quasi-Gothic landscapes to a score
by Danny Elfman.

Not that this isn't an enjoyable experience in itself, and as seen in
the vast Screen 1 at the Empire it is at times breathtakingly pretty.
It's just inessential, and while it may be unfair to expect a classic
from a favoured filmmaker every time out, when they tackle something
with the pedigree and history of Alice In Wonderland you can't help but
hope for something special. And that's the problem, that Tim Burton,
while he is still making decent films, has been a long way off special
for some time now.

6/10 (if they gave half stars it'd be 6.5), but that doesn't mean it's
a bad film. It's possible that my grade is affected by high
expectations and lost potential. If you have kids, I'm sure it'll be
better than 90% of the dross that passes for family films now. At least
there is some artistry involved, and while he might not be at his best
I'll still always pay to see a Tim Burton film (although I got this one
for free…)