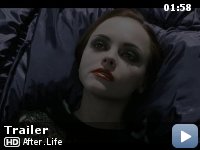 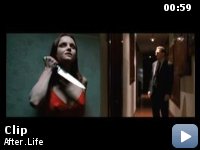 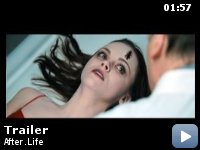 A young woman caught between life and death… and a funeral director who appears to have the gift of transitioning the dead, but might just be intent on burying her alive.

Storyline
After a horrific car accident, Anna (Ricci) wakes up to find the local funeral director Eliot Deacon (Neeson) preparing her body for her funeral. Confused, terrified and feeling still very much alive, Anna doesn't believe she's dead, despite the funeral director's reassurances that she is merely in transition to the afterlife. Eliot convinces her he has the ability to communicate with the dead and is the only one who can help her. Trapped inside the funeral home, with nobody to turn to except Eliot, Anna is forced to face her deepest fears and accept her own death. But Anna's grief-stricken boyfriend Paul (Long) still can't shake the nagging suspicion that Eliot isn't what he appears to be. As the funeral nears, Paul gets closer to unlocking the disturbing truth, but it could be too late; Anna may have already begun to cross over the other side.

Taglines:
How do you save yourself when you're already dead?

Alfred Molina was originally cast as Eliot but was replaced by Liam Neeson.

Eliot Deacon:
It's time now. You're absolutely beautiful for your funeral.
[crossing his hands]

Eliot Deacon:
It's is if you were still alive. Just sleeping. This is how they're all going to remember you.

Good idea, great actors, but the film just has too many flaws.

I understand that this is a film that will divide opinions. Perhaps it
is intelligent. Perhaps it has a most wonderful, original idea for a
movie that made me rent it in the first place. Perhaps Liam Neeson and
Christina Ricci are wonderful actors. But it doesn't change the fact
that the film simply has too many flaws. You can accept a few in an
otherwise good film, but having too many of them simply destroys the
atmosphere. That is precisely what happened in this case, in my
opinion.

Allow me to elaborate. George Lucas once said that a movie doesn't have
to follow the rules of our reality in order to be believable, it just
needs to follow the rules of its own reality. This is exactly where
this movie fails. It creates an unexplained horror world where
something absurd happens every now and then: lights go out every time a
lady walks past them with a big noise until the whole corridor has
turned black (how cliché is THAT?!), plastic bumping head starts
suddenly moving for no apparent reason, following a guy when he is
walking. I wish the movie would have at least allowed me to believe
that it was something the characters imagined in their heads, as in
some other, more respectable scenes. But no, the guy didn't even see
the lifeless bumpy head moving, it just did so for no apparent reason.
What is so "psychologically thrilling" about that?

These kinds of events go on and on. For example, after the
might-be-dead lady escapes from the man holding her as prisoner, she
suddenly starts bumping into walls (in a straight corridor!) and making
a terrible noise. Possibly we are supposed to assume that she is so
scared she has become hysteric, but then again she didn't seem hysteric
either in the previous or in the following scene, nor is she in any
immediate danger – the guy holding her as prisoner isn't really
threatening in any way.

The words "for no apparent reason" are key words for several events in
this movie. Believibility requires a reason for a cause. This movie
doesn't provide them, just irregular events placed around the plot –
events that more often than not don't affect the plot any way, I might
add.

The most disturbing part for me, however, was the way it dealt with the
questions of life and death. It tries to talk about in-depth questions
– what happens to us when we die, and are we really that alive when we
live our pathetic fear-run lives, and so forth – but ends up stating
clichés such as "we die to make life more meaningful" or something
along those lines. Something we have heard billion times before in
every funeral (or B-class drama movie) we've gone to. The movie is
filled with tons of other clichés as well – along the lines of "you are
more afraid of living than of dying", and a small child telling the
woman "I am you" when she asks who the kid is in her nightmare (or
whatever you call them weird visions all the characters keep getting
every now and then), and so forth. And the worst part is, these clichés
just won't stop! There is hardly any action, just line after line, and
EVERY SINGLE LINE seems to be one I've heard a dozen times before! I
wonder if the screenwriters were on strike when this film was scripted,
because a good idea just falls flat this way.

And finally – what exactly happens to a person when he/she dies? The
question of whether he/she will go on living as a spirit of some sort
is an intriguing question. That is a question that doesn't seem to
concern this movie at all. The question that does concern this movie –
whether the body can go on living, running in the hallways and throwing
stuff around – is not an intriguing one, not to me at least. Sure, one
could respect it in a 50's style zombie-horror-movie. And if this was
one, I might accept it. But this isn't one. This is supposed to be an
intellectual movie raising intellectual questions about life and death.
To assume that we should even consider the possibility that a MATERIAL
BODY jumping around throwing things (and BREATHING, for Christ's sake)
could be DEAD, is underestimating the intelligence of the same audience
for whom the movie is sold to as an "intelligent psychological
thriller".

All of the above is more or less absurd. And I am a person who finds
absurdity amusing. I suppose one could respect a movie for making one
burst out a laughter every few minutes. But if its unintentional, there
seems to be something wrong with either the script or directing
(sometimes acting, too, but not in this case). Seriously, I did laugh
every now and then. Out loud too, not just inside my head. And an
"intelligent psychological thriller" shouldn't make you do that.

Liam Neesom is a wonderful actor – once again. That gives this film two
stars. Third one for a good attempt to create something original – even
though in my eyes the attempt somewhat failed in this case. I would
love to give more stars to an original and a clever idea, but every
time I try to go for the fourth a picture of the moving plastic head
bumps into my head and once again I begin to laugh.