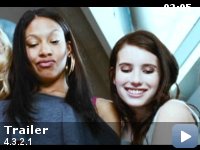 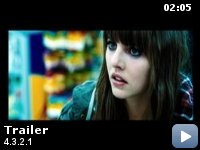 While Jo (Roberts) is chained down in a dead end supermarket job, her friends are all out on their own…

Storyline
While Jo (Roberts) is chained down in a dead end supermarket job, her friends are all out on their own separate adventures: Cassandra (Egerton) is jetting off to New York to meet her Internet boyfriend; Kerrys (Warren-Markland) is on a one woman crusade fighting for female liberation and Shannon (Lovibond) is on a one way trip to meet her maker. But a chance encounter with some diamond thieves sends their separate worlds on a collision course with not only each other, but fate itself. These 4 girls are about to have 3 days they will never forget, spanning to 2 cities. That is … if they survive.

Dillon:
Do you kiss your mum with that mouth?

Kerrys:
Nah, but I kissed yours.


4.3.2.1, is a British-teen aimed film with standard Brit ingredients of
guns, sex etc. I went with my mum as she (like me) enjoys gritty street
Brit flicks such as Kidulthood, Adulthood, Bullet Boy etc.

Admittedly, my mum was the oldest in the premiere screening, and it was
a feisty atmosphere, but I was used to this from when I went to the
opening screening of Adulthood.

It started off slow. It was just quite a lot of things happening, with
little sense or links between them, but as the characters divided off
into 4, the story really kicked in. It was similar in style to Pulp
Fiction in the fact it follows the individual stories of the
characters, all of which have links that connect them together
throughout. This was very, very well done throughout and included
flashbacks between the switching of characters so the audience could
remember what had happened.

It was very well directed, had a good flow to it, and had lots of
comedic parts, all of which were subtlety put in to it so to not make
it into a predominately comedic film.

The film was well rounded off, with me actually leaving quite
surprised. The ending left scope for a sequel (which I know looks to be
in the pipeline) and I actually enjoyed it far more than I expected.

Most films I see at the cinema, I leave thinking I don't want to see it
again, not because it was rubbish, but because I felt I'd enjoyed it
enough not to need to re-watch it. This, however, was simply
brilliantly made, had a strong plot and left me wanting more. My mum
even enjoyed it more than me, and she's 40 😛 Although not my highest
rated film this year so far, this does go down as probably the most
enjoyed and well worked film I've seen this year.