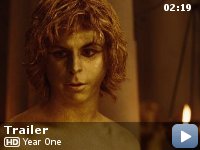 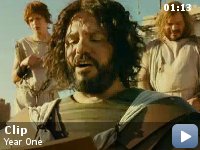 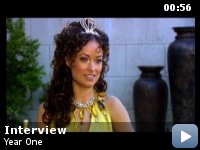 After being banished from their tribe, two hunter-gatherers encounter Biblical characters and eventually wind up in the city of Sodom.

Storyline
Zed, a prehistoric would-be hunter, eats from a tree of forbidden fruit and is banished from his tribe, accompanied by Oh, a shy gatherer. On their travels, they meet Cain and Abel on a fateful day, stop Abraham from killing Isaac, become slaves, and reach the city of Sodom where their tribe is now enslaved. Zed and Oh are determined to rescue the women they love, Maya and Eema. Standing in their way is Sodom's high priest and the omnipresent Cain. Zed tries to form an alliance with Princess Innana, which may backfire. Can an inept hunter and a smart but slender and diffident gatherer become heroes and make a difference?

Anachronisms:
When Cain and Abel are "wrestling" on the ground, Cain is wearing rubber rain boots or galoshes instead of sandals.

Oh:
If we never ever see you again, it's not because we are avoiding you!

Is the vast majority dead wrong?


Firstly, let me mention that this is my first IMDb post ever and I feel
compelled to make this post based on many different things. I went into
this movie with no prior knowledge other than a trailer of the movie
where michael cera gets berries knocked out of his hands etc. The scene
made me laugh and I thought that Jack Black and Cera could be a good
pairing for a comedy. I did not know that the movie was directed by
Harold Ramis nor that the script was written by Ramis as well as the
guys from The Office (all three of whom are comedy geniuses), nor did I
know that the movie had been panned by Roger Ebert: the only movie
critic whom i actually respect in that we have very similar taste in
movies. If I had read the Ebert review (1 star), I probably wouldn't
have gone to see the movie but nonetheless I did. There are two kinds
of comedy: comedy with a moral to the story and mindless comedy for the
sole purpose of making people laugh. This is the latter but it is done
to perfection. I'm not going to talk about the movie itself other than
to say that the scenes with Oliver Platt and Cera had me laughing as
hard as the first half hour of Borat (i.e. I could barely breathe). I'm
not claiming that this movie is a classic, in fact I'll admit that
there was no real point to the movie and the philosophical bits fell
pretty flat but all in all there were many scenes in this movie where
Ramis' genius is apparent. I went to the movie to get some laughs and I
definitely got my moneys worth. For a quick example of some other
comedies which had me leaving a large amount of pee for theatre
personnel to mop up later: A Fish Called Wanda,…The Holy Grail,
Office Space, Borat, Austin Powers, Happy Gilmore. OK I didn't see most
of these in the theatre but you get the point. I can't really say why
so many people are panning Year One. My only thought is that they
really just don't get the humor. Obviously there is a plentiful supply
of people on IMDb that will not like this notion since they couldn't
possibly be wrong about anything but in my opinion they are mistaken
when it comes to this movie. I have a feeling that people's opinions of
this movie will change in time. Is it possible that a pointless cave
man comedy could be before its time? I hope this post will get a few
more people to watch this movie with an open mind.

TagsUSA
The Six Wives of Henry Lefay
Transformers: Revenge of the Fallen