While She Was Out 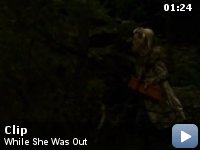 Storyline
Della Myers is an overwhelmed upper-middle-class housewife who lives in a large house in the suburbs with her twin children and her abusive husband, Kenneth. Kenneth lets Della know that he thinks she gives all her attention to the twins and neglects her house and her appearance. Late on Christmas Eve, Della drives to the local mall to buy gift-wrap. While searching for a parking space in the jam-packed lot, Della notices an old car taking up two spaces. Frustrated and annoyed, she decides to leave a paper message on the windshield of the old car, writing, "Hey, 'Jack'. How selfish can you be?" After the mall closes, Della's car is held by the driver of the old car and she is threatened by four punks — Chuckie, Huey, Vingh, and Tomás. When the security guard of the mall attempts to protect Della, he is shot and killed by Chuckie. Della tries to escape from the criminals in her truck…

Taglines:
They Messed With the Wrong Woman on the Wrong Night

It says that a girl named Susan Montford both wrote and directed this
"movie." No wonder she has no other credits to her name for writing or
directing. She made a severe vocational error in choosing this as her
career. This is one of the worst human creations of this millennium.

The fundamental thing wrong with this movie other than its ridiculous
story of a woman running away from four weak thugs, is the blatant and
complete lack of LOGIC.

**After she leaves the mall, she gets approached by four thugs as they
surround her. Tell me, what woman would aggressively SHOVE a potential
attacker while being surrounded, and insult them verbally? I don't mean
after an attack had already started, because then of course it's
completely normal for someone to fight back. But she shoved that guy
and pretty much escalated it to the next level. No woman would do that
unless she 1) had a weapon, 2) has the confidence of knowing that
backup is very close, and so is relatively safe from harm, or 3) the
attackers are so young, and weak looking that she's pretty sure she can
take them. None of that applied in this situation, so she was just
acting like someone that's asking to get raped or mugged. And by the
way, when the security guard approached, as SOON as he came within
viewing distance of Kim Basinger, why wouldn't she immediately either
run towards him for help, or scream??

**When she drives off after the security guard gets shot in the head,
she drives into a deserted part of town, and crashes. She had a good
three minute lead on the pursuers, instead of simply running off on
foot in a diagonal direction behind houses and climbing fences and
continuing, she gets out her Red Toolbox and starts messing around
under her hood. I understand she was trying to fix her car, but she
should've ran.

(I didn't even mean this to be a chronological summary of the movie,
because I loathe people who do that in their reviews, but it just so
happens that every main sequence of this movie has something so
blatantly stupid that I have to comment on it).

**Why would she carry a loud, Red Toolbox as she's trying to sneak away
in the dark? When she does get caught, one of the jokers demands for
her to open the toolbox. First she resists, then eventually opens it.
And takes out a wrench. This scene here is so rich in subtle overtones
of the complete failure of dramatic effect I have to break it down,
it's one of the dumbest scenes in the entire movie. When asked to open
the box, she's resisting at first as if it were her plan to somehow get
one of the thugs to open it themselves out of anger after she didn't
open it, in the same way that someone in some action movie might have
some device that an enemy demands that person to
touch/push/open/manipulate, and once that hero refuses to open it, the
enemy grabs that device, only to have that device automatically
dispense a chemical/shoot him in the face/render him unconscious, which
was the hero's plan all along. It feels like that's what they tried to
do with Kim Basinger here, as she opens the toolbox dramatically and
quickly takes out a WRENCH and dispatches one of the thugs, and somehow
GETS AWAY from him and the three other thugs.

**Throughout the rest of the movie, basically what you see is this
suburban house wife, sneaking around the woods as she carries her Red
Toolbox, taking out various tools used as weapons to KILL HER
ATTACKERS.

**When she was running away, how did she end up moving BACK to where
the thugs were? I think it was the scene where they had that radio
playing loudly in tribute to the dead dude. She somehow crept up on
them when I thought she was moving AWAY from them.

**Finally, this whole premise is so weak because the whole reason she's
being chased in the first place is because from the thugs' perspective,
she was a witness to a murder they committed against the security
officer earlier, and so they felt they had to kill her. How ridiculous.
As one of the thugs even said, they could've just left town and
returned back to whatever city they drove from, no one but her had seen
them anyway, and she probably didn't get the license plate. Even if
these possibilities wouldn't work in their favor, how is raising hell
and hunting down someone to kill them improving your chances to get
away with the original murder?

TagsCanada
I Love You, Man
The Haunting in Connecticut