Where the Wild Things Are 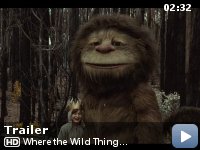 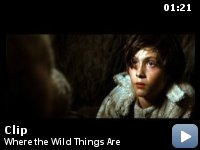 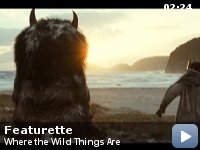 An adaptation of Maurice Sendak's classic children's story, where Max, a disobedient little boy sent to bed without his supper, creates his own world–a forest inhabited by ferocious wild creatures that crown Max as their ruler.

Storyline
A young boy named Max has an active imagination, and he will throw fits if others don't go along with what he wants. Max – following an incident with Claire (his sister) and her friends, and following a tantrum which he throws as a result of his Mother paying more attention to her boyfriend than to him – runs away from home. Wearing his wolf costume at the time, Max not only runs away physically, but runs toward a world in his imagination. This world, an ocean away, is inhabited by large wild beasts, including one named Carol who is much like Max himself in temperament. Instead of eating Max like they normally would with creatures of his type, the wild things befriend Max after he proclaims himself a king who can magically solve all their problems.

The open call for Max was huge. It took several months and thousands of boys auditioned from several countries worldwide.

Continuity:
During the "Rumpus", when Carol jumps straight up into a tree trunk, he falls back on his front. However, when the camera cuts to Max, then back to Carol, he is now on his back.

Claire:
[on the phone]
Who else was there?

Claire:
I can't. We're supposed to go to my dad's that weekend.

Max:
The snowplows left some snow across the street, and I dug a hole into it.

Claire:
Go and play with your friends.


It's taken Spike Jonze a while to write, film, edit and (after some
wrestling with Warner brothers over the final cut) release his
adaptation of Maurice Sendak's Where the Wild Things Are. One who
greatly admires filmmakers will wait especially for a filmmaker who
takes his time in creating something after years of speculation. Now,
the filmmaker who first came on the scene with Being John Malkovich,
once again gives me a one-word response with this third film of his:
Wow. Hot damn. That's two more. This is, simply, a classic work of
film-making, but also on a particular subject that so few filmmakers
even attempt to make let alone get right, which is what it's like to
really be a child. Films that come to mind like this could also include
the 400 Blows, Fanny and Alexander, (arguably) Tideland and E.T. Now
here's another, and one that is directed with an original eye and an
inspiration of texture and feeling, a look like out of our own wanted
childhood playgrounds. Or some kind of playground.


If you don't know the story by Sendak- and to be fair it's only several
pages long and its story was *loosely* used for this film- is about
Max, who, not entirely pleased with his life in the real world ventures
into the world of the 'Wild Things', a place where he can be king (or
rather makes himself one) and tries to create a paradise with his
fellow creatures. This is the main bit of what the story is "about",
but how it's about it is a whole other matter. It's a movie children
can see and hopefully adore, but it's more than that. What it's going
for is childhood itself, what makes up a young guy who has little
experience in the real world and can only really see things through
imagination and in a prism of what the 'real world' represents.

We see Max in class, for example, learning about how the sun works in
relation to Earth. It's a truthful but pessimistic lecture (considering
to elementary school kids no less) about how one day the sun will die,
and so will all life. This is carried with Max when he ventures into
the world of the Wild Things, and when he mentions this to Carol
there's a perplexed response to this. "It's so small," Carol says of
the Sun, and while it doesn't bother him at the moment it later comes
back as a bit of real inner turmoil that Carol can barely contemplate.
Or anyone else for that matter. Can one really be expected as a child
to understand the full scope of the sun dying out and life as everyone
knows it ending? It may be billions of years away, but to a little boy
it could be just around the corner.

That, by the way, is one of the brilliant things about the movie – all
of Max's collected experience, and who he is as a person, and what he
can see and understand around him in his family and surroundings, is
represented in the bunch of Wild Things. All of Max, indeed, is split
among all of them: Carol, KW, Douglas, Ira, Alexander, and a particular
'quiet' Wild Thing that barely says a word, they're all Max, and yet
because of their split pieces they're never fully whole either. This
makes it easy, perhaps, for Max to be crowned as their king (hey, he
did lead vikings after all!), and to lead Carol's dream of a fortress
for them all where "everything you would want to happen would happen."
There's magical moments experienced among them, and all of the Wild
Things, thanks to the Jim Henson creature shop work, are all in front
of us and live and breathe as real things in this set of 'wild'
locations (woods, desert, beach, rocky coast). As soon as you can open
up yourself to these being real beings, not just animatronics, the
whole emotional core of the film opens up as well.

But oh, it's also such an unusually, beautifully realized film. From
its vivid and in-the-moment use of hand-held cinematography (and,
sometimes, the stillness of looking at the creatures and Max in the
backdrops), to the songs from Karen O. that are always supportive of
the scenes (never the obtrusive kinds in other kids movies), to the
complex relationships between all of the characters that one can see
reminiscent of the Wizard of Oz, it's a piece of pop-art that lets the
viewer in. Its welcoming, refreshing and kind of staggering to see
someone who knows the way children think, and how we don't have to be a
mixed-up little boy to identify and see ourselves in Max (and, also,
how we can't fully identify with things as a child like divorce, re:
Carol and KW's 'friendship'). Where the Wild Things Are works as
spectacle and comedy, and as the best Jim Henson movie the man never
made, so it works for children. But for adults, because it's really
about *us*, it can work wonders for us too.