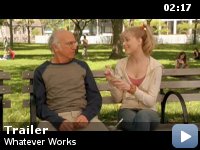 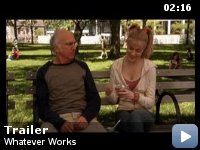 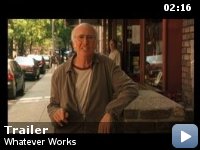 Attempting to impress his ideologies on religion, relationships, and the randomness (and worthlessness) of existence…

Storyline
Attempting to impress his ideologies on religion, relationships, and the randomness (and worthlessness) of existence, lifelong New York resident Boris Yellnikoff rants to anyone who will listen, including the audience. But when he begrudgingly allows naive Mississippi runaway Melodie St. Ann Celestine to live in his apartment, his reclusive rages give way to an unlikely friendship and Boris begins to mold the impressionable young girl's worldly views to match his own. When it comes to love, "whatever works" is his motto, but his already perplexed life complicates itself further when Melodie's parents eventually track her down.

The role of Boris Yellnikoff was original written for Zero Mostel. After Mostel's death in 1977, Woody Allen set the screenplay aside. However, with a potential actor's strike during 2008-9, Allen chose this old screenplay to be his next film. Furthermore Zero Mostel and Larry David both played the role of Max Bialistock. Mostel in the original Producers and David in the play within a show representing the main story arc from season 4 of Curb your Enthusiasm.

Continuity:
Near the beginning of the film, when Boris is talking with his wife Jessica, the position of Jessica's arms keeps changing from shot to shot.

Boris Yellnikoff:
That's not what I'm saying, imbecile. You guys completely misrepresent my ideas, why would I even want to talk with those idiots.

Boris Yellnikoff:
No, don't tell me to calm down, I am calm. Just stop.

Boris' Friend:
Don't jump on us just because we don't understand what you're saying.

Boris Yellnikoff:
I didn't jump on you. It's not the idea behind Christianity I'm faulting, or Judaism, or any religion. It's the professionals who've made it into corporate business. There's big money in the god racket, big money.
[…]

See this movie and then read the external reviews


I saw this movie in a packed cinema and the audience loved it to the
extent that many applauded at the end. So I came home, looked it up in
IMDb and read some of the review by professional film critics. What I
found helps to explain why nobody reads papers anymore and why
professional movie reviews are increasingly irrelevant. The critics
drooled all over themselves for No Country for Old Man — a ridiculous
blood bath where the bad guy can see through walls, magically find
people on the run, and kill repeatedly without raising much more that a
mild interest from the local and state police. Yet many of these same
critics think the characters in this new Woody Allen film aren't
realistic. God save the film critics.


Back to the film. I can't remember the last time I laughed this hard at
the movies, and I wasn't alone. It takes special talent to direct a
movie that is so dependent on perfect comic timing to work, and the
actors in this film hit their marks consistently. If there is character
in this movie that shouldn't be the subject of study in an abnormal
psychology class, I missed them.

If you care about intelligent movies for grown-ups, then you need to
support movies like this one.

TagsUSA
Evangelion: 2.0 You Can (Not) Advance
Spread