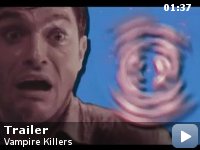 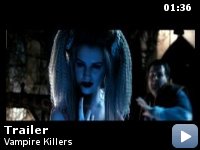 Their women having been enslaved by the local pack of lesbian vampires thanks to an ancient curse, the remaining menfolk of a rural town send two hapless young lads out onto the moors as a sacrifice.

Storyline
Centuries ago, Baron Wolfgang MacLaren vanquished the Vampire Queen Carmilla in the remote Cragwich; however, before decapitating the evil vampire, she curses the locals and descendants of the baron, swearing that every woman would turn into a lesbian vampire on the eighteenth birthday. On the present days, the clumsy and naive cuckold Jimmy is dumped again by his girlfriend Judy and misses her. His best friend Fletch is fired in his job of clown after hitting an annoying boy. The two friends are broken and decide to camp in the countryside to forget their problems, and Jimmy throws a dart in a map in a pub to decide where they should go. They head to Cragwich and when they arrive in the bar Baron's Rest, they see four hot girls leaving the place in a Kombi. The innkeeper offers the old Mircalla cottage in the woods for them, the same place the girls will lodge. Meanwhile, Lotte, Heide…

Sidney Goatherder No.7
/
The Storyteller

Taglines:
They Won't Go Down Without a Bite.

Writers Stewart Williams and Paul Hupfield were challenged to think of the dumbest and yet most commercial title possible for a film, Lesbian Vampire Killers was the answer. They then went away and wrote the script.

Went in for the title, went out with a smile


This is one of those titles that make you expect the worst, but make
you have to watch it. So I took some time on a weary afternoon, and I
gave it a shot.

The first minutes I was happily surprised. Settings and costumes chosen
with care, good camera-work and effects (none of the vague stuff that
surrounds low-budget flicks), and some witty dialogues. Typical
British, yes, but that's a positive remark. The main characters, and
their main philosophy, was much to my liking. What follows is more of
the same, and I never felt the need to fast-forward or to hide my face
and ears in shame. My eyes definitely could appreciate the displayed
beauty, whereas in England, these girls should actually be harder to
find.

Okay, so the critics will bash on the plot (no sh*t, Sherlock) and the
overacting in some cases (again, it's not a candidate for the Oscars).
True, no need to expect the best either, but if that's what you're
going for, then why choose this movie.

A good time, with true laughs … I got what I came for.

TagsEnglandUK
Coco
While She Was Out