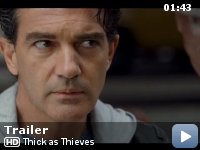 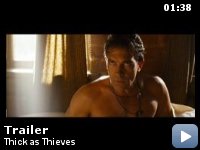 A veteran thief recruits a younger crook to help him pull off one final job in order to repay his debt to the Russian mob.

Storyline
In New York, the experienced art thief, Keith Ripley, invites the bold thief from Miami, Gabriel Martin, to team up with him. He plans the heist of two valuable mysterious antique Faberge eggs, located in a safe, of the well protected Russian jewelry Romanov. Each egg is worth twenty million dollars on the black market, and Ripley needs his cut to free himself from his debt to a powerful mobster, known as Nicky. The reluctant Gabriel agrees to participate, after having a one night stand with Ripley's goddaughter Alexandra Karolin. Meanwhile, the persistent Lieutenant Weber, who has unsuccessfully tried to put Ripley in jail for twenty years, figures out how to anticipate the movements of the criminal in order to catch him.

Revealing mistakes:
When Martin ('Antonio Banderas') and Ripley ('Morgan Freeman') are in the subway together and Martin takes out the iPhone to mark the spot on the wall, you can see by pausing the movie that he just clicks on the Photo application and then the lock room's plant suddenly pops up out.

[In Flemish with subtitles]

Joost:
The Russians think they own the world now.


What no comments, no rating, no release date?!! This is what I first
thought when looking at the IMDb page for this movie, "how can it be
possible, a movie released here in Taiwan but not in America?!"

First off I had trouble finding this movie on IMDb since the English
title given in Taiwan is The Code", where as according to IMDb its
"Thick as Thieves"

I didn't know what to expect when entering this movie as I hadn't read
a million posts on IMDb saying how its amazing and the others saying it
should be the 2nd thing on your list to do after suicide.

It's pretty much your average bank heist movie, the story is based
around a job which is utterly impossible unless you have amazing tools
and gadgets which probably take longer to create than the whole
security system of the bank they're planning to hit. The story moves
along nicely, it has a few short moments where it seems to drift away
from the main plot but it doesn't distract you from the main track. The
acting by Freeman is his usual really, the more experienced and wiser
man who once again does a decent job. The young rookie crook role goes
to Banderas who generally does a good job but in the early stages of
the movie just doesn't look right. The young rookie is the same as most
the young cocky rookie's you see in most movies, unfortunately a middle
aged man making wise cracks just doesn't look right on screen.

Like you'd expect there's a surprise ending which isn't so easy to
figure out, or when you think you've figured it out you still end up
being wrong. It's what you'd expect from a heist movie and it certainly
doesn't disappoint. The directing is nothing special, it just seems
like standard Hollywood movie making with nothing really standing out
as being special. The dialogue is nothing flash, its normal dialogue
with very little standout lines. The performances are once again
nothing stand out, all the actors do a decent job in this movie but
nothing worthy of an Oscar.

Overall this isn't a super awesome big time blockbuster, its an OK
piece of cinema which is sure to entertain you but its not going to
have you shouting from the roof tops