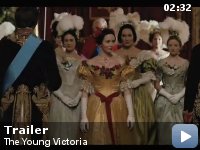 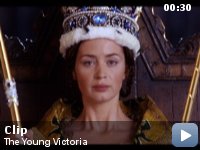 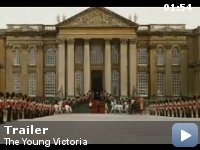 A dramatization of the turbulent first years of Queen Victoria's rule, and her enduring romance with Prince Albert.

Storyline
Dominated by her possessive mother and her bullying consort, Conroy, since childhood, teen-aged Victoria refuses to allow them the power of acting as her regent in the last days of her uncle, William IV's rule. Her German cousin Albert is encouraged to court her for solely political motives but, following her accession at age eighteen, finds he is falling for her and is dismayed at her reliance on trusty premier Melbourne. Victoria is impressed by Albert's philanthropy which is akin to her own desire to help her subjects. However her loyalty to Melbourne, perceived as a self-seeker, almost causes a constitutional crisis and it is Albert who helps restore her self-confidence. She proposes and they marry, Albert proving himself not only a devoted spouse, prepared to take an assassin's bullet for her, but an agent of much-needed reform, finally endorsed by an admiring Melbourne.

Taglines:
Her country. Her heart. Her majesty.

The dress Victoria wears for her first meeting with her council is a copy of the actual dress Queen Victoria wore on this occasion. It survives in a UK museum collection, and has faded to brown; black dye at the time was not stable.

Factual errors:
"Victoria and Albert reigned" it says in the closing titles. As the sovereign, only Victoria would reign. Albert had no official standing, as the film's "Thank you for reminding me…" scene shows. No husband and wife ever reigned over England together except William and Mary.

A touching romance and a gripping human drama


Apart from having the longest reign in British history (63 years),
Queen Victoria also holds two other distinctions. She was, apart from
our current Queen, the oldest ever British monarch, living to the age
of 81. And she was also the youngest ever British (as opposed to
English or Scottish) monarch, coming to the throne as a girl of
eighteen. And yet whenever television or the cinema make a programme or
film about her, they seem far more interested in the older Victoria
than they do in the young girl; the version of Victoria with which
modern audiences will probably be most familiar is Judi Dench in "Mrs
Brown". "The Young Victoria" tries to redress the balance by showing us
the events surrounding her accession and the early years of her reign.
It has the rare distinction of being produced by a former Royal, Sarah
Duchess of York, whose daughter Princess Beatrice makes a brief
appearance as an extra.

There are three main strands to the plot. The first concerns the
intrigues of Victoria's mother, the Duchess of Kent, a highly unpopular
figure even with her own daughter, largely because of the influence of
her adviser Sir John Conroy, who was widely rumoured to be her lover.
(According to one unfounded rumour he, and not the late Duke of Kent,
was Victoria's natural father). The second strand concerns the growing
romance between Victoria and her German cousin Prince Albert, and the
attempts of King Leopold of Belgium, who was uncle to both of them, to
influence this romance. (Leopold's hope was to increase the prestige of
the House of Saxe-Coburg, to which both he and Albert belonged). The
third concerns one of the strangest episodes in British political
history, the Bedchamber Crisis of 1839, when supporters of the Tory
Party (which had traditionally supported a strong monarchy) rioted
because the young Queen was perceived to favour the Whig Party and
their leader Lord Melbourne, even though the Whigs had historically
supported a quasi-republican system of government, with the monarch
reduced to a figurehead.

Scriptwriter Julian Fellowes is known for his Conservative views, and
at times I wondered if this may have coloured his treatment of
political themes, as he seems to lean to the side of the Tories, the
predecessors of the modern Conservative party. Their leader Robert Peel
is shown as statesmanlike and dignified, whereas Melbourne, for all his
dash and charm, is shown as devious and uninterested in social reform.
There may be some truth is these characterisations, but Fellowes
glosses over the fact that only a few years earlier the Tories had
opposed the Reform Act, which ended the corrupt electoral system of
rotten boroughs, and that they had benefited from William IV's
unconstitutional dismissal of a Whig administration.

Lessons in dynastic and constitutional history do not always transfer
well to the cinema screen, and this one contains its share of
inaccuracies. Prince Albert, for example, was not injured in Edward
Oxford's attempt on Victoria's life, and Melbourne (in his late fifties
at the time of Victoria's accession) was not as youthful as he is
portrayed here by Paul Bettany. King William IV certainly disliked the
Duchess of Kent (who was his sister-in-law), but I doubt if he would
have gone so far as to bawl abuse at her during a state banquet, as he
is shown doing here. I also failed to understand the significance of
the scene in which the Duchess and Conroy try to force Victoria to sign
a "Regency Order"; the Duchess's constitutional position was made clear
by the Regency Act 1830, which provided that she would become Regent if
her daughter was still under eighteen at the time of her accession. No
piece of paper signed by Victoria could have altered the provisions of
the Act.

There are also occasional infelicities. In one early scene we see
Victoria and Albert playing chess while comparing themselves to pawns
being moved around a chessboard, a metaphor so hackneyed that the whole
scene should have come complete with a "Danger! Major cliché ahead!"
warning. Yet in spite of scenes like this, I came to enjoy the film.
There were some good performances, especially from Miranda Richardson
as the scheming Duchess and Mark Strong as the obnoxious Conroy. It is
visually very attractive, being shot in sumptuous style we have come to
associate with British historical drama. Jim Broadbent gives an amusing
turn as King William, although he does occasionally succumb to the
temptation of going over the top. (Although not as disastrously over
the top as he was in "Moulin Rouge").

The main reason for the film's success, however, is the performances of
Emily Blunt and Rupert Friend as the two young lovers Victoria and
Albert. Blunt is probably more attractive than Victoria was in real
life, but in her delightful portrayal the Queen is no longer the old
lady of the popular imagination, the black-clad Widow of Windsor who
was perpetually not amused, but a determined, strong-minded and loving
young woman. Her love for Albert, and their happy family life together,
was one of the main reasons why the monarchy succeeded in
reestablishing itself in the affections of the British people. (With
the exception of George III, Victoria's Hanoverian ancestors had been
notoriously lacking in the matrimonial virtues). Blunt and Friend make
"The Young Victoria" a touching romance and a gripping human drama as
well as an exploration of a key period in British history. 8/10