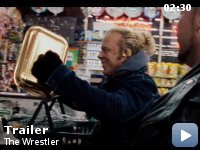 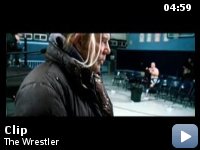 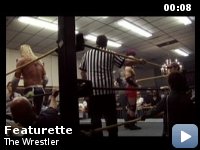 A faded professional wrestler must retire, but finds his quest for a new life outside the ring a dispiriting struggle.

Storyline
This is a drama about an aging professional wrestler, decades past his prime, who now barely gets by working small wrestling shows in VFW halls and as a part-time grocery store employee. As he faces health problems that may end his wrestling career for good he attempts to come to terms with his life outside the ring: by working full time at the grocery store, trying to reconcile with the daughter he abandoned in childhood and forming a closer bond with a stripper he has romantic feelings for. He struggles with his new life and an offer of a high-profile rematch with his 1980s arch-nemesis, The Ayatollah, which may be his ticket back to stardom.

Due to the film's modest budget, W. Axl Rose donated the use of Guns N' Roses' "Sweet Child O' Mine" free of charge for the final match.

Continuity:
The promoter mentions that Ram's match with Tommy Rotten will be for "the strap", which refers to a promotion's title belt. However, following Ram's victory over Rotten, he is not seen holding a title belt or announced as the new champion.

WXW Announcer:
and a true American, the people's hero… Randy "The Ram" Robinson!

An excellent drama about an aging wrestler


The Wrestler won the Golden Lion a few days ago in Venice. Obviously
that's going to build up some high expectations but director Darren
Aronofsky introduced it as a "simple little film" and he didn't want
the movie to get over-hyped. He said it's been a busy week as he only
finished the film 6 days ago!!


Randy "The Ram" Robinson, played brilliantly by Mickey Rourke, was a
star professional wrestler in the 1980s. He had a legendary
pay-per-view match against the Ayatollah in his prime, his own Nintendo
game, posters, "Best of The Ram" VHS series and legions of fans who
worshipped him. The film begins in the present day with The Ram
collecting a paltry sum of money for his latest fight only to discover
he's been locked out of his trailer home because he's behind on his
rent. He has a good physique for his age – with the aid of steroids and
tanning salons – he still has good friends in the local wrestling
brotherhood and he enjoys hanging out with Cassidy (played by Marisa
Tomei) at the strip club where she works. He's a likable guy and the
neighbourhood kids look up to him as a hero, so it's easy to root for
this washed-up old wrestler as he participates in choreographed, yet
amazingly bloody, wrestling matches. He struggles to pay the rent while
also searching for deeper meaning in his life as he knows that he can't
wrestle forever. However, wrestling is the only thing he's good at, and
he lives for those precious moments when he stands on the top
turnbuckle and his adoring fans cheer his name – but once he steps out
of the ring his life is a mess. He'd like to reconcile with estranged
daughter Stefanie (played by Evan Rachel Wood) but she hates him after
he abandoned her in her youth. He's never given her a birthday gift,
probably because he doesn't know which day it is.

There's a parallel story with Cassidy, an aging stripper. She also
knows that her career is coming to an end, but unlike The Ram she seems
to have plans after she retires, and her finances are in good order.
They've obviously known each other for quite some time, and though
there seems to be some mutual attraction Cassidy has always followed
the rule "don't get involved with a customer". They have a complex
relationship that changes throughout the film, but you can always feel
that Cassidy cares about his well-being.

This movie works because it feels so real. All the characters are so
natural in their roles that you'll feel drawn into this world of
wrestling. Mickey Rourke doesn't just play a wrestler, he is a
wrestling star, he is Randy The Ram in every way. The wrestling scenes
were also amazingly crafted and you can see Randy build off the crowd's
excitement. The film does a great job of showing why so many fans love
"fake" wrestling.

I thoroughly enjoyed this little film but it's not for all tastes. It's
gritty, raw, sometimes depressing, sometimes funny, and yeah I'll admit
that I cried. A 9.5/10 for me and it's a must-see for wrestling fans
(especially from 1980s era) and, obviously, anyone who enjoyed the
previous works of Aranofsky and/or Rourke. Mickey Rourke and Marisa
Tomei were both outstanding and Evan Rachel Wood also shone in her
supporting role.