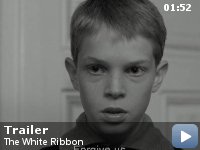 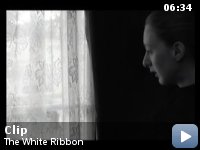 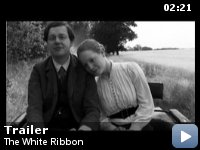 Strange events happen in a small village in the north of Germany during the years just before World War I, which seem to be ritual punishment. The abused and suppressed children of the villagers seem to be at the heart of this mystery.

Storyline
From July, 1913 to the outbreak of World War I, a series of incidents take place in a German village. A horse trips on a wire and throws the rider; a woman falls to her death through rotted planks; the local baron's son is hung upside down in a mill; parents slap and bully their children; a man is cruel to his long-suffering lover; another sexually abuses his daughter. People disappear. A callow teacher, who courts a nanny in the baron's household, narrates the story and tries to investigate the connections among these accidents and crimes. What is foreshadowed? Are the children holy innocents? God may be in His heaven, but all is not right with the world; the center cannot hold.

The School Teacher as an Old Man

Michael Haneke wanted the environments to be very dark, so many indoor scenes used only practical light sources such as oil lamps and candles. In some of the darkest scenes, where the crew had been forced to add artificial lighting, extra shadows could be removed in the digital post-production which allowed for extensive retouching.

Martin:
I gave God a chance to kill me. He didn't do it, so he's pleased with me.

A careful and ambiguous analysis of evil


Fans of Michael Haneke's more morally shocking films such as 'Funny
Games', 'Benny's Video' or the draining 'Time of the Wolf' might find
themselves surprised by the quieter and slower analysis of evil in his
latest work 'Das Weisse Band'.


The action takes place in a North German village shortly before the
outbreak of the First World War and in structure presents a number of
subtly drawn individual characters as they are caught up in a
mysterious series of violent events.

In the hands of a mere moralist this could be an unbearable few hours.
But it's credit to Haneke's skill as a film-maker that we are utterly
caught up and absorbed by a large cast of children and adults.

One of the on-going arguments in Haneke's films appears to be the
origins of human evil, or perhaps more precisely put, individual acts
of evil behaviour. Are such acts an individual's responsibility or do
they spring from a climate in which particular energies are at work?
This is the question Haneke appears to be exploring here (just as was a
central question relating to French society in 'Cache').

One of the most disturbing things at the heart of the film is the fact
that we do not know why particular acts of evil take place (including
the maiming of a disabled child and the beating of a nobleman's son),
or even who commits them. However, this is no 'whodunnit', although
with its retrospective voice-over from the School Teacher's p.o.v. we
are let to believe for a long time that were in a crime/thriller genre.

Throughout his body of work so far, Haneke has suggested that looking
for the sort of easy answers films and TV all too readily supply is
partly responsible for our misunderstanding how violence in society
occurs. (Funny Games).

'The White Ribbon' bypasses the usual dramatical devices of motivation
and blame and instead softly focuses on an environment (in this case
Germany in the first quarter of the Twentieth Century) in which certain
unhealthy energies are at work.

These energies include an emotionally repressed and joyless
Protestantism, the mistreatment and oppression of women, the familial
abuse of children, the fetishism of strong masculine and patriarchal
values, and the un-breachable divide between the rich and the poor. Set
over all this, like an umbrella, is the fact that the small provincial
society depicted in the film is all but completely isolated from wider
society.

Another poster here has pointed out that Haneke is using his village as
a microcosm to reflect Germany as a whole, and I would agree with that.
Haneke's Dorf, whilst having an individual character, is a relative of
Von Trier's Dogville in the sense that it stands for a larger set of
national values. In this respect Haneke seems to be diagnosing German
society in the run up to the 'Great' War as one of authoritarianism,
religious doubt, intolerance, and fear.

What is remarkable in such a film is how little human joy or love is to
be found in such a seemingly idyllic rural landscape. The love strand
(between the narrator Teacher and the dismissed 17 yr old children's
nurse) has a rather strained aspect. It is as though the film maker is
suggesting that affection might also be down to available opportunity.

One of the most moving scenes in The White Ribbon is when a young child
brings his father, a Priest, a caged bird he has nursed back to health.
The father's beloved pet canary was killed (by his daughter as a
protest against the bleak, loveless household she's been reared in – a
home in which a father shows more affection to a small bird than his
own children.

Thus the scene symbolically depicts a child demonstrating the love that
the parent himself is unable of showing. Tears fill the priest's eyes.
It is a tiny moment of love and hope in an otherwise emotionally barren
wasteland. It is also a symbol of how a new generations of Germans have
dealt with, and healed, previous decades of pain.