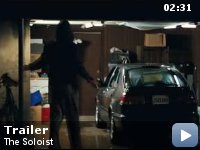 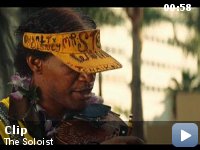 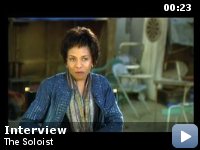 A Los Angeles journalist befriends a homeless Juilliard-trained musician, while looking for a new article for the paper.

Storyline
In 2005, the only thing hurting Los Angeles Times columnist Steve Lopez more than his face from a recent bike accident was his pressing need for story ideas. That is when he discovers Nathaniel Ayers, a mentally ill, homeless street musician who possesses extraordinary talent, even through his half-broken instruments. Inspired by his story, Lopez writes an acclaimed series of articles about Ayers and attempts to do more to help both him and the rest of the underclass of LA have a better life. However, Lopez's good intentions run headlong in the hard realities of the strength of Ayers' personal demons and the larger social injustices facing the homeless. Regardless, Lopez and Ayers must find a way to conquer their deepest anxieties and frustrations to hope for a brighter future for both of them.

Taglines:
Life has a mind of its own

In the scene that Nathaniel Ayers and Steve Lopez attend a rehearsal concert, all the seats are covered with canvas. This was not cinematic imagery; this is actually done in some concert halls during rehearsals to reflect a more accurate sound as if the seats were being occupied.

Continuity:
When Lopez pulls over in the tunnel after spotting Ayers, his car blocks the right lane. In subsequent shots, cars are seen in the background cruising through that very same lane, one even merges into it, even though Lopez's car is blocking it just a few yards ahead.

Steve Lopez:
'Points West' by Steve Lopez. A year ago, I met a man who was down on his luck and thought I might be able to help him. I don't know that I have. Yes, my friend Mr. Ayers now sleeps inside. He has a key. He has a bed. But his mental state, and his well-being…

Uplifting: Finding a Golden Needle in the Haystack of Urban Blight


First off, I should say that I am personally familiar with this story,
having worked in downtown L.A. for the last 19 years and seeing Mr
Ayers and his cello many a time around 3rd and Hill Sts. I've also read
Lopez's columns in the Times for years and followed this one with
interest and satisfaction. Making a film about a tale like this
restores my belief in Hollywood beyond the mindless bunk it churns out
year after year.

Downey Jr and Foxx play a newspaper columnist and homeless man who come
together in a most unusual way. Downey is a newspaper columnist looking
for something original and interesting to write about. He finds it when
he sees Foxx beautifully playing battered stringed instruments along
3rd street in downtown L.A. Foxx has been there for years but on this
day grabs the eye of the columnist because the columnist himself is
experiencing hardship and doubt related to his own position. He begins
to write about this talented but troubled man who fills the stinky air
around him with harmony. They become friends but keep in mind this is
not fiction. The friendship hits many bumps that continue to this day.
Nathaniel Ayers (Foxx's character) may be a brilliant, educated
musician, but he suffers from bouts of schizophrenia that manifest at
any time. Downey's character accepts this as it adds more intrigue to
his columns. Then he accepts it on a personal level. Their friendship
ultimately becomes real and meaningful. You sense that Downey's
character needs the friendship even more than Foxx's homeless man does.
In the end, Downey's Lopez can see the positive effect his work has
brought to the plight of the homeless, yet he wonders personally how
much better he has made Nathaniel…? His reflections make us think
also.

Downey Jr and Foxx play their characters to near perfection and the
film masterfully takes its time in developing the relationship between
the two. Great to see director Joe Wright telling a contemporary tale
just as effectively as he has in previous works. The film makes us
wonder how many other Nathaniel Ayers are lurking out there on the
streets? Life being what it is, of course we will never know. The
beauty of the film is that is shows what can happen when just one
Nathaniel Ayers is found after being lost for so many years. There's no
sugarcoating; Ayers doesn't magically get better and rejoin mainstream
society. Instead, the mainstream accepts him for what he is and what he
offers and begins integrating him as best it can. This film will
certainly pop up at award time next year.