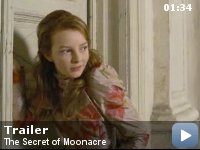 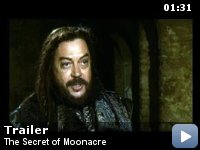 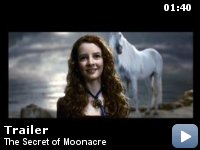 When 13 year old Maria Merryweather's father dies, leaving her orphaned and homeless, she is forced to leave her luxurious London life to go and live with Sir Benjamin…

Storyline
When 13 year old Maria Merryweather's father dies, leaving her orphaned and homeless, she is forced to leave her luxurious London life to go and live with Sir Benjamin, an eccentric uncle she didn't know she had, at the mysterious Moonacre Manor. Soon Maria finds herself in a crumbling moonlit world torn apart by the hatred of an ancient feud with the dark and sinister De Noir family. Maria discovers that she is the last Moon Princess and, guided by an unlikely mix of allies, she must overcome her family's pride in order to unearth the secrets of the past before the 5000th moon rises and Moonacre disappears into the sea forever.

Taglines:
A magical adventure for all the family!

It had been arranged for a real lion to be used in filming, and to be dyed black. However the insurance costs required for filming actors with a real lion were astronomical, so a digital lion was a much cheaper option.

Loveday:
You don't understand, do you?

Maria Merryweather:
I'm starting to understand one thing. The real curse of this valley is pride.

Imagine, if you will, the Story Warehouse. This is where storytellers
collect the various bits and pieces which they then assemble into
stories. We go past the Romance and Horror sections and arrive at
Magic, where we find the shelves fairly empty. Some items are always in
stock – you can always pick up Orphaned Child Sent To Live In Run-Down
Old House Where Strange Things Happen With No Explanation, for
instance, and there's never any shortage of Slightly Sinister Patriarch
Figure Who Flies Into Rage For No Good Reason And Won't Answer
Questions, or Quirky Manservant With Fantastic Abilities (I'll take
two, please). The Magic Lions section was pretty much cleaned out by CS
Lewis for the Narnia stories, of course, although it appears that he
didn't have much call for Magic Lion (Black Fur) or Magic Lion
(Disguised As Big Dog).


And that is the problem with The Secret Of Moonacre – the story has a
strong feeling of having been cobbled together from bits and pieces,
and those bits and pieces are either overly familiar – Ioan Gruffud's
mysterious bad-tempered uncle is no stranger – or else simply not very
good (clearly a great deal was left on the Moon shelves – we have Moon
Pearls, Moon Princesses, Moonacre itself, the Moon coming down to
destroy everything). Much which needs explaining is never explained,
and the bits of the story simply don't fit very well together. It's as
if by combining the legs from a flat-pack table and the carcase from a
flat-pack kitchen unit you can make a sideboard. Well, yes, but I don't
think I'd want it in my living room.

And this is a shame, because the look of the film is fine, as is Dakota
Blue Richards. Gruffud and Tim Curry both deliver their cliché
characters perfectly adequately, Juliet Stephenson is given a comedy
nanny to play with rather uncomfortably, and Natasha McElhone looks
wonderful and acts, at times, embarrassingly badly (she delivers a
curse with a complete absence of menace, for instance. Clearly,
cheekbones on their own are not enough).

I sometimes wonder why film producers still don't seem to understand
that a solid story and script is the starting point for a successful
movie.