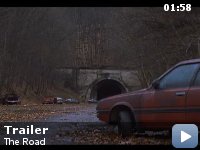 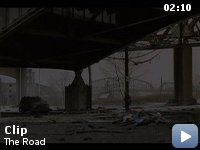 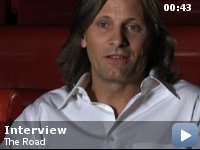 A post-apocalyptic tale of a man and his son trying to survive by any means possible.

Storyline
A father and his son walk alone through burned America. Nothing moves in the ravaged landscape save the ash on the wind and water. It is cold enough to crack stones, and, when the snow falls it is gray. The sky is dark. Their destination is the warmer south, although they don't know what, if anything, awaits them there. They have nothing: just a pistol to defend themselves against the lawless cannibalistic bands that stalk the road, the clothes they are wearing, a rusting shopping cart of scavenged food–and each other.

Taglines:
In a moment the world changed forever.

The scene where the Man washes the Boy's hair in the stream was shot three times. During that scene, the weather was very cold, so John Hillcoat promised Kodi Smit-McPhee that it would be done in only two takes. However, during the second take, the sun came out and ruined the shot, requiring a third take. The boy's crying afterward was Smit-McPhee actually crying, not acting.

Continuity:
Midway through the movie the Man finds an unopened Coca-Cola can in a machine. When it falls out it has a dented top. When they drink from the can, there is no dent.

Wife:
What's happening? Why are you taking a bath?

"You must think I'm from another world."


The wonderful thing about the Road is that it will more than likely
please the two camps: the one that has not read Cormac McCarthy's
Pulitzer prize-winning book, and the one that has. There's the nervous
feeling one gets when watching the theatrical trailer, though – will it
be this super action-packed spectacle, will those images that open the
trailer with "THE END OF THE WORLD IS NEAR!" stick around, and will
Charlize Theron actually be in the movie that much? As it turns out, if
you liked the book very much and worried about how its uber-bleak and
incredibly dark and (especially) gray landscapes would appear, it
provides that perfectly. And if you haven't read the book… it still
works as a movie, as a simple-but-not story of a father and son
survival drama- and clinging on to their humanity- first, and then a
post-apocalypse thriller far second.

To describe the plot is not impossible but sort of unnecessary. All you
need to know going in (if you're part of not-read-book camp) is that a
father and son, after becoming on their own after the mother of the
house exits, are traveling together across a true post-apocalypse
landscape to a coast. We never are given a fully clear explanation as
to why or how the apocalypse happened. This is more than fine; because
John Hillcoat's film centers on the father and son (called in the
credits simply Father and Son, played by Viggo Mortensen and Kodi
Smit-McPhee), there doesn't need to be anything really specific. At
least this will be fine for most people who may be by now tired of the
usual viral or religious or (damn) 2012-type explanations. We're given
hints though, to be sure, that there may have been mutations or some
kind of earth-bound phenomenon (earthquakes happen a couple of times),
and past this we, like the travelers, are left to our own devices.

How it happened isn't as fascinating and visually compelling, anyway,
than how it looks. The Road provides us many scenes and vistas that are
precisely grim and desolate and terrible. Some of these are full of
visual details like big city-scape shots, and others, like when the
Father and Son are on the ramp of a highway, is intimate and hard (this
setting also provides one of the most touching moments as Mortensen's
character finally 'lets go' of two important details from the deceased
mother of his son). And other times Hillcoat lets us just take in the
gray-ness of everything, just as one could take in the sight of masses
of flies in his film the Proposition. It's against this backdrop of
rain and sludge and grime and decay that imbues this intense bond
between the father and son so greatly, and the complexity that comes
with not just staying alive but retaining humanity and dignity and
doing right and wrong by the people they encounter.

This may not be news to people who read the book. I still, having read
it two years ago (which sadly seems like long ago in usually
remembering specific images of a book), can't get the descriptions of
scenes out of my head, or the stark manner of how characters talked and
dread and existential horror was relayed. But, again, the film not only
respects this but gives it further life. Dialog scenes in the movie-
save for a couple of the flashback scenes with Charlize Theron's Mother
character- are never obtrusive to the storytelling, which is a rightful
concern to have with an adaptation of the book. And, more importantly,
the acting and chemistry between the two leads is incredible. Mortensen
is a given to be an actor embedded in his character, so much so that
when he takes off his shirt we see his bony torso as being really that,
and watching him is magnetic. Yet it's also crucial to see how good the
kid Smit-McPhee is too, especially when it comes time for scenes where
the boy has to deal with his father's growing desperation or the
electrifying showdown with a thief.

To be sure, a couple of walk-on roles by Guy Pearce as another fellow
traveler and especially Robert Duvall as a "90 year old man" as his
character says provide some needed space, and Hillcoat has a couple of
very wise flashback/dream bits with The Man and his wife (namely a very
small, brilliant moment at a piano), but it's the all on the two main
character to lead the film, and it's on them that it delivers so
strongly. As long as you know that this is a film centered not on big
action sequences (though there are a couple), and not on big special
effects (though there's that too), and it's more akin to a
life-or-death-and-what-else story not unlike Grave of the Fireflies,
you'll know what you're getting with the Road.

It is very depressing on the whole, and not exactly what I would
recommend as a 'first-date' movie – unless you're so hot for Mortensen
and/or Cormac McCarthy you don't care either way. However, it's *good*
depressing, and equally the best adaptation of the book possible while
a tremendous, original vision for the casual movie-goer.

TagsUSA
The Girl Who Kicked the Hornet's Nest
Brothers