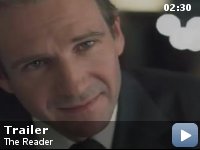 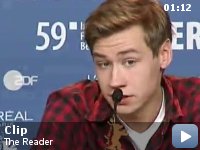 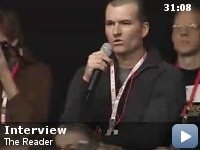 Post-WWII Germany: Nearly a decade after his affair with an older woman came to a mysterious end, law student Michael Berg re-encounters his former lover as she defends herself in a war-crime trial.

Storyline
THE READER opens in post-war Germany when teenager Michael Berg becomes ill and is helped home by Hanna, a stranger twice his age. Michael recovers from scarlet fever and seeks out Hanna to thank her. The two are quickly drawn into a passionate but secretive affair. Michael discovers that Hanna loves being read to and their physical relationship deepens. Hanna is enthralled as Michael reads to her from "The Odyssey," "Huck Finn" and "The Lady with the Little Dog." Despite their intense bond, Hanna mysteriously disappears one day and Michael is left confused and heartbroken. Eight years later, while Michael is a law student observing the Nazi war crime trials, he is stunned to find Hanna back in his life – this time as a defendant in the courtroom. As Hanna's past is revealed, Michael uncovers a deep secret that will impact both of their lives. THE READER is a story about truth and reconciliation…

The Latin lines Michael quotes to Hanna are "Quo, quo scelesti ruitis? Aut cur dexteris / aptantur enses conditi?" These are the opening lines of Horace's 7th Epode, a short poem where he expresses outrage at the fact that his countrymen are still engaged in civil war. "Villains, where are you rushing to? Why are your hands / Grasping those swords that were sheathed?" (translation A.S. Kline). The Greek lines he quotes are the opening stanza of Sappho's 16th fragment: (transliterated) "Oi men ippeon stroton, oi de pesdon, / oi de naon phais' epi gan melainan / emmenai kalliston, ego de ken' ot- / to tis eratai". "Some say a host of horsemen, others of infantry, and others of ships, is the most beautiful thing on the dark earth: but I say, it is what you love." (translation Denys Page).

Anachronisms:
In a 1976 scene, the Calculator seen on the desk when Michael is reading "The Odyssey" at night is presumably an OEM-Version of the Casio LC-403B. This calculator came on the market around 1985.

Brigitte:
You didn't wake me.

Michael Berg:
You were sleeping.

Brigitte:
You let me sleep because you can't bear to have breakfast with me.

The Reader is a brilliant, sexually charged, and oddly heartbreaking tale about the complexity of human morality and the lifelong repercussions that result from our actions.


There's an urgency in human nature to understand. When it comes to the
Holocaust, history's bleak, unsettling period, it doesn't matter what
book you've read, film you've seen or account you've heard; in the end,
your response it halted by its incomprehensible conclusion. How could
humanity course its way towards such a violent, destructive path? How
could people knowingly send men, women, and children to their impending
doom? Most puzzling, how could the world allow it? Even though its been
63 years since the blood-drenched annals of World War II, its aftermath
today is still bone chilling.

After a six year celluloid dry spell, Stephen Daldry returns to the
director's chair in a brilliant, sexually charged, and oddly
heartbreaking tale about the complexity of human morality and the
lifelong repercussions that result from our actions. Adapted from
Bernhard Schlink's best-selling German novel, "The Reader," Daldry's
visual translation is a powerful, emotionally absorbing film that is
one of the year's best. It's superbly crafted.

With World War II over, Germany, in 1958, is still recovering. Deep
within Heidelberg, Germany, Michael (David Kross), a young pubescent
teenager haven fallen ill, is comforted by Hanna (Kate Winslet), a hard
working woman who is twice his age. Taken by her generosity, Michael
revisits Hanna to offer his gratitude. What begins as an awkward
reunion escalates into a seductive, forbidden affair that intensifies
when Michael begins reading to the distant, empty Hanna, who is deeply
awakened by Michael's spoken literature. Too young to understand love's
complicated implications, Michael is emotionally devastated when Hanna
suddenly disappears. Nearly a decade later, unable to forget his
passionate summer while studying law, he attends a Nazi trail, and to
his dismay, hears Hanna's distant voice.

"The Reader" is a complex film; maybe a little too complex for some.
Though the film pertains to Nazism and the "sins of our fathers," in
essence, "The Reader" is a film that reflects the emotions inside all
of us. During a lecture, Michael's professor comments, "Societies like
to think they operate on morality but they don't." In this cynical age,
how far from reality is that statement? During Hanna's trial, she's
questioned why she participated in the Nazi party's horrendous war
crimes, broken she replies, "It was my job." Oddly enough, that seems
to be the justification most people use. Surprisingly, though, "The
Reader" isn't about her exposure as a war criminal, but an exposure on
an individual who took the wrong path. She's not a bad person; she's
simply made wrong choices. However, when it comes to having involvement
in the Nazi's liquidation of the Jews, how "wrong" can you get? "You
ask us to think like lawyers," cries on student, "what are we trying to
do?" A distraught Michael replies, "We are trying to understand!" But,
just who exactly is trying to grasp a deeper understanding: the court
or Michael? How can Hanna's past be forgiven? Director Stephen Daldry
brings the much needed emotional layer that a character such as Hanna
Schmitz desperately needs. Although her actions are beyond
unforgivable, strangely, we sympathize with her. Maybe it's her other
shameful secret. Maybe it's superb character development.

"The Reader" is a film that is driven by it's raw performances. In one
of her finest hours, Kate Winslet gives the performance of a lifetime.
It's a haunting and heart-breaking. David Kross, who's only 18, is
impressive as the teenager with raging hormones; it's such a daring
performance. Winselt and Kross bring this picture together. Their
performances are jaw-droppingly brilliant. Completing the role of
Michael, as the tortured grown man, is Ralph Fiennes, who balances
Michael's despair through his melancholic emotion when he encounters a
grown Jewish woman, played by Lena Olin, who was also at Hanna's trail.
Although her scenes clock in less than 10 minutes, Olin, too, is
breathtaking.

When "The Reader's" credits rolled, I sat quietly shaken by what I had
witnessed. It's a film that is impossible to forget. When a grown
Michael asks Hanna, "Have you spent much time thinking about the past?"
Heartbroken, she replies, "It doesn't matter what I think. It doesn't
matter what I feel. The dead are still dead." She's right.