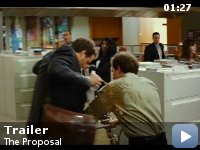 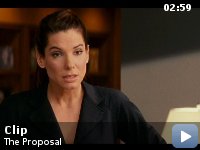 A pushy boss forces her young assistant to marry her in order to keep her Visa status in the U.S. and avoid deportation to Canada.

Storyline
For three years, Andrew Paxton has slaved as the assistant to Margaret Tate, hard-driving editor at a New York publisher. When Margaret, a Canadian, faces deportation for an expired visa, she hatches a scheme to marry Andrew – he agrees if she'll promise a promotion. A skeptical INS agent vows to test the couple about each other the next Monday. Andrew had plans to fly home that weekend for his grandma's 90th, so Margaret goes with him – to Sitka, Alaska – where mom, dad, and grams await. Family dynamics take over: tensions between dad and Andrew, an ex-girlfriend, Andrew's dislike of Margaret, and her past color the next few days, with the INS ready to charge Andrew with fraud.

Sandra Bullock plays a Canadian who wants to marry her assistant (Ryan Reynolds) in order to keep her Visa status in the U.S. and avoid deportation to Canada. In real life, Reynolds is from Canada and Bullock is American.

Continuity:
While Andrew is at the door of the chairman's office the camera switches between him and Margaret with the chairman in the background. Originally the chairman was sitting with legs under the desk then he was turned out with one leg on the other and then he was back in his original position again.

Grandma Annie:
[to Margaret, when adjusting the wedding dress]
Where are your breasts, dear?


Although the movie is predictable, like most romance comedies are,
nevertheless it was sweet. Sure a bit unrealistic in terms of the time
line of the whole plot takes place but this is why we have movies like
this, so you can escape into the fantasy of romance and humor. If you
are looking for realism then watch a 3 hour drama, but if you want to
escape for awhile and just enjoy a movie you don't have to think too
much about then it's worth your time. If you don't want to pay to go
see it in the theater, then wait for it to come out on DVD. I saw it
during a private screening as part of the ATL Film Festival, for close
to two hours I thought of nothing else and laughed and even cried a
bit. I would definitely see it again. It may not be the best romantic
comedy I have seen but the movie still holds lots of charm.

TagsCanada USA
The Six Wives of Henry Lefay
Transformers: Revenge of the Fallen