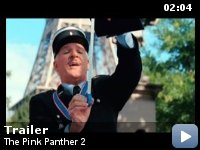 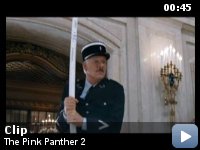 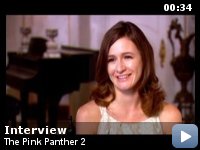 Insp. Jacques Clouseau teams up with a squad of International detectives who are just as bumbling as he is. Their mission: Stop a globe-trotting thief who specializes in stealing historical artifacts.

Storyline
After having been rewarded for solving the mystery of the Pink Panther Diamond, inspector Jacques Clouseau has been assigned to minor tasks by his boss inspector Dreyfus so as not to have him in his way anymore. Unfortunately, the famous diamond has once again been stolen as have many other artifacts in a series of burglaries around the world. His past success will enable inspector Clouseau to be part of the dream team comprised of the greatest detectives of the affected countries, where he will be able to display his numerous talents across the world.

Steve Martin immediately accepted to reprise his role for this sequel because of his love of the character and the opportunity to do very physical, burlesque comedy.

Revealing mistakes:
When Clouseau jumps from the globe to the chandelier, the face of Steve Martin's stunt double is visible.

Insp. Jacques Clouseau:
Let me bring you up to speed… We know nothing. You are now up to speed.


Even though I knew the movie had been panned by the critics, I still
agreed to go along with my friends to watch it. As the credits rolled
in the end, I sat wondering what were the critics expecting from the
movie…


Of course the plot is stupid, the end is predictable. But the movie
delivers what every comedy intends to deliver…lots of good laughs !
If the reviewers were expecting a thought provoking plot, Oscar winning
performances, or a great achievement in "moving image"…perhaps they
bought the wrong movie ticket. Also, I have not seen the original Peter
Sellers movie. Looks like every Peter Sellers fan hates the new series.
But I really don't see why shouldn't I enjoy the jokes in Pink Panther
2 just because Peter Sellers was funnier.

This may not be the funniest movie of the year. But its 1.5 hours well
enjoyed ! Don't get swayed by the critics…go and have fun in this
movie !