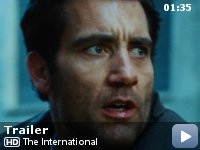 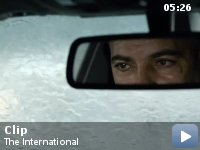 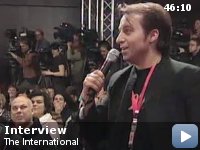 Storyline
In The International, Interpol Agent Louis Salinger and Manhattan Assistant District Attorney Eleanor Whitman are determined to bring to justice one of the world's most powerful banks. Uncovering illegal activities including money laundering, arms trading, and the destabilization of governments, Salinger and Whitman's investigation takes them from Berlin to Milan to New York and to Istanbul. Finding themselves in a high-stakes chase across the globe, their relentless tenacity puts their own lives at risk as the bank will stop at nothing – even murder – to continue financing terror and war.

Originally scheduled for release in August 2008. After badly-received previews, and re-shoots to turn it into more of an action film, it was released in February 2009, during the worst banking crisis in U.S. history.

Crew or equipment visible:
In the final scene, a close-up of Salinger's eyes shows a white rectangular reflector.

Worth a theater ticket

I pretty much had zero expectations for this film. I'd seen an ad or
two and it looked conventional at best, clumsy at worst. The previews
certainly don't do it justice. It starts smart and mean and doesn't let
up. Not everyone will enjoy the unrelenting mood, but I found the
picture intense and the rest of the audience in the theater seemed to
agree. It helps that Clive Owen is believable as the protagonist and is
highly watchable. A lesser actor in the role would have made the film
much less effective. Armin Mueller-Stahl also adds credibility and
depth. Other supporting actors were, for the most part, strong and
gritty. There was probably pressure for a female lead, so in Noami
Watts's defense, this is probably part of the reason why the character
feels so irrelevant.


I'm happy anytime that a slick international thriller has some brains
and isn't completely predictable, so I found the picture highly
entertaining, if imperfect. It it flawed? Most certainly. But if you
walk into the theater without pretensions, you'll probably be as
entertained as I was. And I do think a theater visit is warranted, for
the photography mentioned by previous reviewers, if not for the
Guggenheim scene alone. I think it's dangerous to trump up a scene too
much, because it inevitably leads to disappointment. But having no idea
about what was coming… suffice to say, I didn't find the directing
anything other than thrilling.

TagsBerlinUSA
The Other End of the Line
District 13: Ultimatum