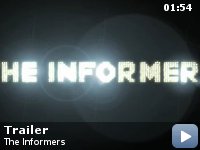 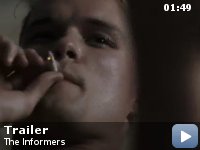 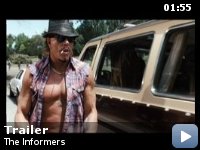 A multi-strand narrative set in early 1980's Los Angeles, centered on an array of characters who represent both the top of the heap (a Hollywood dream merchant, a dissolute rock star, an aging newscaster) and the bottom (a voyeuristic doorman, an amoral ex-con). Connecting the intertwining strands are a group of beautiful…

Storyline
Loosely connected stories capture a week in L.A. in 1983, featuring movie executives, rock stars, a vampire and other morally challenged characters in adventures laced with sex, drugs and violence.

Taglines:
Greed is good. Sex is easy. Youth is forever.

Though there are no explicit mentions of vampires in the final film, the character Dirk, played by Diego Klattenhoff, is sighted as possibly being a vampire by some commentators.

All This Talent……But It Did Not Amount To Much!


Well I just saw this film first thing Friday (opening). I was seated
near a gentlemen who was having quite a reaction to every scene, and in
one scene (not a good one for the acting – but I will get there in a
minute) he literally started waving his arms and shaking his head. I
look over and the man was tearing up and I though he was nearly about
to breakdown in full tears. Seeing such a powerful reaction to some
very early scenes in the movie, I thought to myself, "Maybe this is the
guy who wrote it??" The novel I thought, unaware at the time who wrote
the screenplay. So immediately upon my return, I googled Bret Easton
Ellis pics and reviewed many photos. I would bet my life it was him
next to me today. Hair a little longer and darker than in some photos,
but same nose, and face and exact same eyes. Again he was right next to
me so I was not seeing him from across the theater. I asked
(whispering) if he was OK. He said yes, then a moment later (after
another reaction) quietly got up and moved to the back of the theater.
A while later he exit in the middle of the film.

Now, for the film itself. This is no "Less Than Zero" which would be
the closest genre comparison of the Ellis filmography.

While some of the veteran actors gave decent performances the material
seemed more shallow than the LA socialites the film was following. But
after watching the film I suspect this is much more the fault of the
directing than anyone else. It takes the proper hand and understanding
of Ellis material to make it work on the stage or film. Unfortunately,
two of the lesser performances came from actors we see much more in the
film. Foster and Raido seemed like actors "acting" like the types
rather then being the types. While the veteran actors seemed to add
depth to their performances (beyond the material presented) these two
"acted" on a very shallow level, as though trying to imitate the type
of person they thought they were playing. Apparently giving their
character little thought.

The movie sets up many broken and damage relationships and a couple of
potentially heated situations, before it suddenly ends…..What??? The
entire film ends up being a slice of life (many tragic life's) type of
film, with little story or payoff as the ending comes abruptly. At the
end I could care less about there problems or issues and the story and
directing doesn't help those feelings.

Now I am not a person who goes to films to see naked women (a little to
old to make that the priority and was unaware of this one), but when
the movie was over all I could think was "at least Amber Heard was
naked / half-naked a lot and she looked good!" In the lala land of
skinny, to outrageously bony women, this one has nice curves. But its
sad when you leave a film thinking "where was the story" and you know
you will only remember the girl who looked good in "THAT FILM" cause
the title and film itself will be forgotten quickly! Now I have not
read the Ellis novel, but he did help write the screenplay. Based on
his reaction, I can't help to feel this film is not what he imagined it
would be. It certainly was not up to what Hollywood has been able to do
with some of his other works.

To Ellis (as I am sure it was), remember the feeling you had while
watching the film. And make sure the next time you sell your story to
Hollywood to get paid enough money so you can take it a little easier
when the "Filmmakers" butcher your work (who likely did not want you
interfering with them cause THEY know how to make films, not some
writer)! Or in this case, they at least produced a very unsatisfying
film.

TagsArgentina
About Elly
The Taking of Pelham 1 2 3