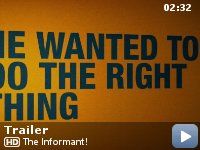 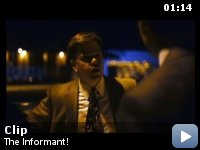 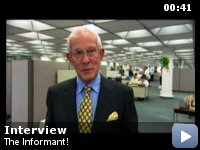 The U.S. government decides to go after an agri-business giant with a price-fixing accusation, based on the evidence submitted by their star witness, vice president turned informant Mark Whitacre.

Storyline
Mark Whitacre has worked for lysine developing company ADM for many years and has even found his way into upper management. But nothing has prepared him for the job he is about to undertake – being a spy for the FBI. Unwillingly pressured into working as an informant against the illegal price-fixing activities of his company, Whitacre gradually adopts the idea that he's a true secret agent. But as his incessant lies keep piling up, his world begins crashing down around him.

Taglines:
matt damon is The Informant!

In an NPR radio interview, Matt Damon said that Steven Soderbergh, to get Mark Whitacre's final apology to the judge just right, directed Damon to perform the lines as if he were accepting an Academy Award. (Damon said it was an example of "perfect direction".)

Errors in geography:
In the scene when they supposedly are in Mexico, the pay phone model reveals they are actually at some Aeromexico lounge in the US.

Mark Whitacre:
[to his son]
Do you?

Mark Whitacre:
Corn *starch*. But Daddy's company didn't come up with that one. DuPont did.


At its core, The Informant! is, by no means, an inherently funny story.
It involves international corporate conspiracies, corruption, deception
and betrayal. Yet somehow, Steven Soderbergh manages to turn Kurt
Eichenwald's book, which depicts the true story of former ADM employee
Mark Whitacre in the manner of John Grisham's best legal thrillers,
into a thoroughly entertaining, often very funny movie. This, of
course, is aided by Matt Damon's brilliant, spot-on portrayal of the
corporate executive-turned-FBI informant, as well as solid work by the
supporting cast.

When I first read Eichenwald's book after learning about this movie, I
was slightly skeptical. Economics and law are far from my forte.
However, what I found was a story so ridiculous and told in such a
compelling way that it was difficult to put the book down. Especially
for a nonfiction story, the characters felt so well-developed and so
three-dimensional that you cannot help but care immensely about them,
despite their flaws. And then, I heard that Soderbergh planned to make
the movie version into a dark comedy. Given some of the subject matter
and material involved, I was worried that the film would turn into too
much of a farce and would not give the real-life story and people the
proper respect.

To my utter relief, I was wrong. While some of the darker elements have
been left out and the film is undoubtedly lighter than its source
material, Soderbergh stayed true to reality, keeping the events mostly
accurate to what Eichenwald described in his book, and hence, to what
really happened; in fact, on a side note, after seeing the movie, the
real-life Mark Whitacre commented that the film was "very accurate",
which is a bit of a surprise considering Soderbergh made the decision
to not consult any of the people involved in the actual 1990s
investigation.

Oddly enough, while this probably sounds contradictory to the opening
statement of my review, much of the humor actually springs out of the
events and dialogue depicted in the book, almost all of which took
place in reality, rather than jokes or quips written by the
screenwriter or improvised by the director or actors. There are so many
hidden layers to the tale that, in retrospect, it is hard to not laugh
or at least gap in wonder at how it all unfolded. Of course, that is
not to say that Scott Z. Burns, who adapted Einchenwald's book for the
screen, did not do any work. The screenplay does an admirable job of
adhering to the true events with enough creativity, wit and originality
to prevent the film from seeming like just a retread of everything
Einchenwald accomplished in his narrative.

Also impressive is the cast. Naturally, as Mark Whitacre, Matt Damon
stands out. Even though he had not met the person he was portraying
before filming, he perfectly captures Whitacre's personality,
mannerisms and attitude, making him seem larger-than-life but at the
same time, completely and utterly human, while many other actors might
have made him too much of a caricature. The supporting cast does a fine
job as well and perhaps the most noteworthy of these actors are Scott
Bakula as the benignly professional FBI agent Brian Shepard and Melanie
Lynskey, who portrays Whitacre's devoted wife, Ginger, with a sort of
Mid-western bubbliness.

In typical Steven Soderbergh mode, the director adds a quirky, unique
tone to the movie. Although the whimsical, almost cartoonish score is
sometimes a bit intrusive, this quaint style effectively mirrors the
film's subtle and often ironic humor, and instead of being distracting,
the cinematography, complete with the intense lighting and vibrant
colors that make Soderbergh's films so distinctly his, helps emphasize
the movie's off-beat wackiness. From the opening credits, viewers are
immersed in the simple, charming vibe of small-town Illinois; this
ambiance is benefited by the fact that Soderbergh chose to film in
Decatur, the very town in which the real-life events occurred.
Everything feels authentic, from the hairstyles to the ADM office and
even the colorful array of ties sported by various cast members
throughout the movie.

Furthermore, by using voice-over narration, Soderbergh effectively
manages to enter the mind of Mark Whitacre, who is, to say the least,
an extremely fascinating personality. Partly thanks to Matt Damon's
nuanced performance, the audience learns to sympathize with – if not
root for – Mark, regardless of his moral ambiguity and questionable
decisions. Perhaps, more than anything else, this is because the movie
never makes fun of him, only at his nearly unbelievable situation. Not
once is he made out to be a completely villainous guy or a complete
hero; he is merely human.

TagsFBIUSA
The Rebound
Blood and Bone