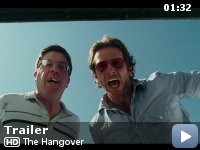 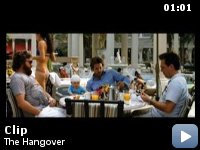 A Las Vegas-set comedy centered around three groomsmen who lose their about-to-be-wed buddy during their drunken misadventures, then must retrace their steps in order to find him.

Storyline
Angelenos Doug Billings and Tracy Garner are about to get married. Two days before the wedding, the four men in the wedding party – Doug, Doug's two best buddies Phil Wenneck and Stu Price, and Tracy's brother Alan Garner – hop into Tracy's father's beloved Mercedes convertible for a 24-hour stag party to Las Vegas. Phil, a married high school teacher, has the same maturity level as his students when he's with his pals. Stu, a dentist, is worried about everything, especially what his controlling girlfriend Melissa thinks. Because she disapproves of traditional male bonding rituals, Stu has to lie to her about the stag, he telling her that they are going on a wine tasting tour in the Napa Valley. Regardless, he intends on eventually marrying her, against the advice and wishes of his friends. And Alan seems to be unaware of what are considered the social graces of the western world…

Taglines:
Am I missing a tooth?

Director Trademark:
[Todd Phillips]
[band]
The foul-mouthed band featured near the end of the movie is the "Dan Band", the same band from Frank's wedding in the movie
Old School and Vince Vaughn's daughters' Bat Mitzvah in
Starsky & Hutch.

Revealing mistakes:
When Phil calls Tracy while she is sunbathing by the pool, we see an obvious attempt to mask the tattoo on her left shoulder with makeup. However it is still visible when the camera is close.

Doug Billings:
[on recording]
Hey, you've reached Doug. Sorry I missed your call. Please leave a name and number and I'll get back to you.

Genuinely funnier than any comedy in recent memory


Most great comedies are based on fundamental truths — we find a deal
of humour in the illumination of our own human tragedy. Office Space is
funny, for example, because we've all worked that type of job, put up
with that type of boss, and suffered that type of monotonous everyday
boredom.

Todd Phillips' new movie, The Hangover, is as aptly titled as anything
else released this year: it's about a Vegas bachelor party gone
horribly awry, in which the groom inexplicably disappears, no one can
remember a damned thing, and Mike Tyson wants his tiger back.

Yes, we've all had those nights, though perhaps not to such extremes
(that's where the exaggeration of comedy serves us). The Hangover is
funny because it takes this cultural ritual — an American tradition;
something almost all of us can relate to — and finds genuine humour in
the pain of its aftermath.

I concede that bachelor party movies are not in short supply; the genre
(if it is, indeed, a genre) should have probably both begun and ended
with the Tom Hanks flick almost three decades ago. But The Hangover
wisely studies the day after rather than the day itself; this is
funnier because the plot works backwards, without tacky flashbacks, and
much of the evening in question is left to our imagination.

While it would be misleading to claim this is a brilliant film (in
either regard – as comedy or character study), it's an assured picture
that finds its footing immediately and achieves a surprising level of
sustenance throughout its running time. And frankly, let's be honest,
this is a breath of fresh air: it's one of the best R-rated comedies of
the decade, and certainly the most uproarious since Superbad was
released two years ago. Most R-rated comedies produced today are
defiant; the R-rating has become a hindrance to film studios'
sensibilities – everything is PG-13, saving the shameless Unrated
schpeel for the DVD cut. The occasional theatrically-released R-rated
comedy, as such, is infrequently modest; the ads stress the rating to
remind us what we've been missing. For every legitimate offer, such as
Forgetting Sarah Marshall, we're treated to movies like College that
attempt to lure us into theaters based on the promise of raunchy
decadence. The problem is that it's all so coldly calculated; these
films are not funny because a majority of the time they are simply lazy
and dishonest.

The simplest reason for The Hangover's success in being genuinely funny
is the fact that it achieves a rare balance of character and vulgarity.
We laugh at the characters' misfortunes because we like them, we
empathize with them, and they are distinctly actualized. Are they
stereotypical? To a certain degree, sure: we have the repressed
pussy-whipped guy who obeys his girlfriend's every command (Ed Helms);
the weird John Belushi-esquire figure who speaks in non sequiturs and
naïve absurdities (Zach Galifianakis); and the womanizer whose
confidence renders him automatic leader of the group (Bradley Cooper).
It's a testament to the strengths of these actors that they make their
characters endearing and believable, even in the face of total lunacy.

Helms has been an underrated highlight of the American Office for the
past several years, never quite earning the praise he deserves. His
character on the show is played with pitch-perfect perversity: he's not
overtly creepy (like the program's other weirdo, Creed), but rather
subtly unnerving. Helms invests a great deal of nuance into what is
ostensibly a throwaway, supporting goofball; this movie, if nothing
else, will justly reveal his talents.

Cooper uses his looks to his advantage: it's funny to watch handsome
people exploit their securities. Cooper essentially turns your typical
Leading Man figure into a bumbling idiot, self-absorbed and clueless.
It's effective, he's got great chemistry with the other guys, and it's
fun to watch such an immoral and ruthless character take center stage
in a mainstream comedy.

Galifianakis, a cult comedian who I've admired for years, has been
struggling quite a while. Not many people other than myself and Sean
Penn saw his 2001 comedy Out Cold, probably because it wasn't all that
great; but he was easily the most amusing aspect of the picture. He
once described himself as being gifted by the opposite of the Midas
touch, with more than a few canceled TV shows to his credit (including
Comedy Central's unheralded Dog Bites Man), but it seems his
persistence has finally paid off: he has discovered, at last, a movie
of strong enough quality to reflect his talents. Galifianakis has a
fair share of the film's funniest dialogue; as far as fat funny guys
go, many of them (such as Chris Farley) made the ill-fated mistake of
playing dumb in a sharp fashion: hurtful quips and silly one-liners,
all self-aware. Galifianakis plays his character straight and the
laughs are subsequently heartier; when he embraces his brother-in-law
while nude, the act seems innocently awkward rather than deliberately
awkward, and that's what makes it so funny. He's described in The
Hangover, by another character, as a child with a beard. Imagine how
funny it is when he names a Caucasian baby Carlos, without any shred of
condescension or knowing humour.

The Hangover is surely destined to become the sleeper comedy hit of
2009, and, more likely, a cult flick in the years to come. It's more
deserving of such acknowledgment than many recent successes, and while
we may live in an era saturated with unnecessary sequels, I actually
left The Hangover hoping to see these guys again. And that's a rare
feeling these days.

TagsUSA
Don't Look Back
About Elly