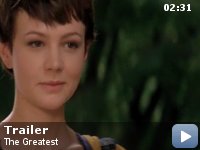 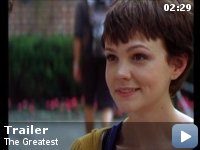 A drama that is centered around a troubled teenage girl and a family that is trying to get over the loss of their son.

Storyline
Teenagers Rose and Bennett were in love, and then a car crash claimed Bennett's life. He left behind a grieving mother, father and younger brother, and Rose was left all alone. She has no family to turn to for support, so when she finds out she's pregnant, she winds up at the Brewer's door. She needs their help, and although they can't quite admit it, they each need her so they can begin to heal.

Susan Sarandon was initially reluctant to tackle the role of the grieving mother in the film as she's played similar parts in recent years, most notably in
Moonlight Mile and
In the Valley of Elah. She was impressed with writer-director Shana Feste's eccentric script, and the fact that the film would shoot close to her New York City-area home on a quick 28-day schedule was also appealing. Still, it took a phone call from Pierce Brosnan (who had just signed on to co-star) to finally convince her to commit to the film.

Continuity:
In the scene where Allen is in hospital on the day of his release, the white sheet on the bed slips down and then is magically back up again. This happens several times.

Rose:
Do you have any party tricks?

Allen Brewer:
Oof. I don't know if it counts, but I never forget people's numbers. Um… I tend to memorize numbers.

Rose:
What are my numbers?


This is not a "feel good" movie, but its feelings are true. The story
follows a family (mother, father, brother) of a young man killed in a
car accident in the first scene of the movie. Their lives are jumbled
up by the introduction of the son's (brother's) girlfriend. I thought
all of the actors turned in fine, powerful performances. Even more
impressive is that the writer/director of the film was a first time
filmmaker. That she was able to get such a marvelous cast in her first
film is amazing. This movie reminded me of "Ordinary People," updated
for today. Of course there are differences, but it's the same genre.


Although I recommend the movie, know that it's kind of a downer. I have
a feeling it won't do well because these days people want movies that
are more of the "feel good" variety.

TagsUSA
The Concert
The Men Who Stare at Goats