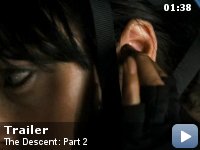 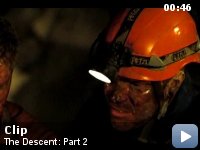 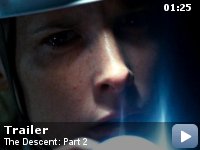 Distraught, confused, and half-wild with fear, Sarah Carter emerges alone from the Appalachian cave system where she encountered unspeakable terrors…

Storyline
Distraught, confused, and half-wild with fear, Sarah Carter emerges alone from the Appalachian cave system where she encountered unspeakable terrors. Unable to plausibly explain to the authorities what happened – or why she's covered in her friends' blood – Sarah is forced back to the subterranean depths to help locate her five missing companions. As the rescue party drives deeper into uncharted caverns, nightmarish visions of the recent past begin to haunt Sarah and she starts to realize the full horror and futility of the mission. Subjected to the suspicion and mistrust of the group and confronted once more by the inbred, feral and savagely ruthless Crawlers, Sarah must draw on all her inner reserves of strength and courage in a desperate final struggle for deliverance and redemption.

More of the same but so what?

Picking up almost immediately where The Descent left off, the
bloodstained Sarah has made it out the cave system, is taken to
hospital and then back into the caves as an unwilling member of a
rescue party to find her missing friends.

If you saw the first film, then you know what happens in this one. If
you know the horror genre, then you know who will get offed, too. None
of which matters a hoot, because familiarity breeds respect and cast,
director and writers, deliver exactly what viewers want. There are the
crawlers, lots of blood, some nicely delivered shocks, plenty of gnarly
special effects and women getting down, dirty and deadly with climbing
axes, bare hands and lumps of rock.

Because all concerned have resisted the urge to widen the story,
introduce new things for the heck of it (such as, I dunno, flying
crawlers), The Descent: Part 2 is actually much stronger than is
usually the case for sequels.

A left-field twist right at the end could be a set up for part 3, but
it's hard to tell. While it didn't come as a surprise (those horror
genres again), it did feel a bit tacked-on. But that's a very minor
quibble and does nothing to detract from what is a great piece of
horror entertainment and a worthy successor to its predecessor.