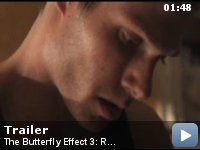 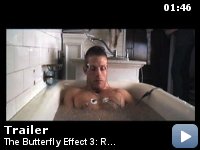 A young man with the power to time travel attempts to solve the mystery of his girlfriend's death.

Storyline
Sam Reide has the ability of traveling to the past and works to the police department solving unresolved crimes, witnessing the events with the support of his sister Jenna Reide and reporting the criminal's identity to Detective Dan Glenn. When Elizabeth Brown that is the sister of his former girlfriend Rebecca Brown that was murdered a couple of years ago pays a visit to him, she tells that she has just found Rebecca's journal with evidences that Lonnie Flennons, who was accused for the murder, is innocent. Sam decides to witness the murder of Rebecca and his interference affects the future. He travels to the past other times trying to fix his mistakes, but every time he returns, the future is in worse condition.

Continuity:
When Vicki and Sam are having sex, they are supposed to be nude however, there are brief glimpses of Vicki's thong, which appears and disappears in some shots.

Sam Reide:
It's nothing personal.

Vicki:
What? Are you – Are you gay? I could introduce you to my friend Brendan. He's gay, too. Maybe you guys could hang out! Well, I'll be sure to give you his number, and you can go, and you know, do man things. Sound good?

Well-plotted thrill ride, but with a predictable twist.

I went into Butterfly Effect: Revelation with very low expectations,
especially after the mediocre sequel. But it is a surprisingly
well-plotted and thrilling puzzle of a movie that has it share of great
moments, but the twist can be guessed by most and it changes up the
rules of the first two.


We follow Sam who lives whose girlfriend Rebecca was murdered 5 years
ago. Like the previous movies, he has the ability to travel back in
time to key moments to gain some new information and sometimes even
alter the past. He uses this to help the FBI catch killers beforehand.
Only this time, the movie adds a few new elements: 1)Sam can travel
back to ANY moment in the past, whether he was present there when it
originally happened or not. 2) He doesn't need to use journals/pictures
to travel back and can do so at his will anytime. 3) A few more but
they are spoiler territory.

But once he gets the information that the killer who is behind bars for
Rebecca's murder is wrongly convicted, he decides to break his own rule
of not altering his own past to travel back to the night of the murder,
but through a mistake creates a serial killer for the world.

Unlike the second movie which had a large amount of plot holes and
ridiculous decisions by the protagonist, this one is for the most part
well-plotted, presented as a puzzle piece instead of a traditional
thriller, and creates suspense by adding the element of guessing the
killer's identity. It has a lot of thrilling moments, particularly in
the last half hour. Unfortunately, the twist the movie tries to pull is
predictable in the movie if you are paying attention. Although that
doesn't mar the experience, it ruins the element of surprise. Also,
some fans of the original may not like the changes to the rules of the
first. The actor's did a surprisingly good part in the movie. The
dialogue was good, although the little attempts at humor failed more
than worked.

Overall, this is a recommended thriller, especially if you are a fan of
the original. It tries to do something different by adding the element
of a serial killer into the mix and gives the protagonist much more
stake in the movie rather than just saving the life of a loved one. If
only it wasn't for the predictable twist, my rating would be higher.

TagsUSA
Nothing But the Truth
Little New York