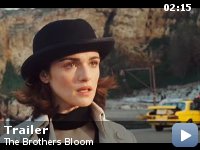 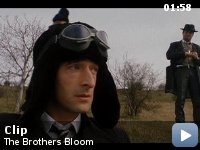 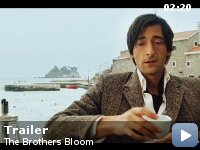 The Brothers Bloom are the best con men in the world, swindling millionaires with complex scenarios of lust and intrigue. Now they've decided to take on one last job – showing a beautiful and eccentric heiress the time of her life with a romantic adventure that takes them around the world.

Storyline
Brothers – older Stephen and three years junior Bloom – have been con artists since they were kids. Stephen is the mastermind, for who the intricacy of the story used in the con is as important as the positive outcome of the swindle. Bloom is the main character of Stephen's stories, the character he considers the anti-hero. As adults, they travel the world and never enlist the same people twice in their cons, except for their consistent sidekick, the mysterious and primarily silent Bang Bang, a Japanese woman who just appeared in their lives one day and who has a penchant for blowing things up. As Bloom hits his mid-thirties, he wants to quit the business as he is losing his own identity to that of the characters he portrays; he doesn't know anymore what is real and what is make-believe. Stephen talks him into one last con, the mark to be the eccentric, lonely but beautiful New Jersey heiress…

The three main characters are based on characters from James Joyce's "Ulysses" (which in turn is based on Homer's "Odyssey"). Stephen is based on Stephen Daedalus, a restless young writer in two of Joyce's novels; in "The Brothers Bloom", Stephen plans their cons with a writer's flair. Bloom is based on Leopold Bloom, who is wandering around Dublin, trying to find himself and his way back to his wife. In The Brothers Bloom, Bloom is figuratively looking for himself, and ultimately finds his way to Penelope. In "The Odyssey", Penelope is Odysseus' wife who waits for him through all of his travels; likewise, here, Penelope awaits Bloom through his wanderings.

They DO make them like they used to, only better!


What a wonderful surprise: Yesterday my sister calls me and tells me
that there's a new film by the director of Brick, playing at the Mill
Valley Film Festival. "I'm there!"

Even before we get in the theater, I know we're in for a different
experience. A pair of toughs with metal detectors wave us down for
hidden cameras and demand we turn our cell phones off. I'm surprised we
didn't have to take our shoes off. Endgame Entertainment certainly
doesn't want any leaks.


Once inside, the director, Rian Johnson, shows up just before the show
starts, fresh off a flight from Abu Dhabi no less. He gives a short
interview with Mark Fishkin (long time director of the festival),
coming off as a very charming, self-effacing, funny and unpretentious
fellow. I like him immediately. Hollywood has not corrupted him (yet).

Like Tarantino, Johnson has closely studied films and makes constant
references and nods to The Classics, especially from the 40s and 50s.
Unlike Tarantino, Johnson writes more original stories and has good
taste and far gentler sensibilities. Obvious influences include: Wes
Anderson, The Cohen Bros, Billy Wilder, John Huston.

The film itself? Instant classic. It's got all the elements you could
want in a Hollywood-style movie: Charming characters, plot twists, tons
of gags, an incredibly beautiful leading lady, sumptuous sets and
locations, and an overall sense "gee-whiz-isn't-this-fun!"

And it's classy, too. It doesn't resort to needless, sensationalist sex
and violence. The writer respects and honors the audience's
intelligence, a all-too-rare occurrence these days.

You could tell that the actors had a blast with the sometimes subtle,
sometimes slap-stick script, relishing their characters' quirks and
foibles.

Overall, Brothers Bloom almost manages perfection. It's one fault lies
in the resolution, the last 5 minutes where it's tone abruptly changes
for darker. Without giving anything away, I feel that it was too
heavy-handed, considering the generally light and wacky spirit that had
predominated. The rest of the audience seemed to feel the same way,
given the hushed mood as the credits rolled. If the producers have an
alternate ending up their sleeves, I suggest they use it, even it has
to be somewhat ambiguous.

Otherwise, I'm happy to contribute to the positive buzz. I really think
Brothers Bloom could be a huge hit, even a timeless classic.