The Boys Are Back 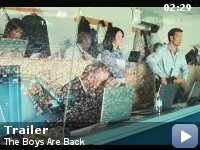 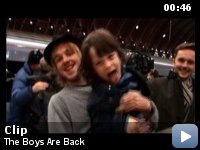 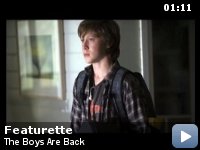 A sports writer becomes a single parent in tragic circumstances.

Storyline
The Boys Are Back is a confessional tale of fatherhood. It follows a witty, wisecracking, action-oriented sportswriter who, in the wake of his wife's death, finds himself in a sudden, stultifying state of single parenthood. Joe Warr throws himself into the only child-rearing philosophy he thinks has a shot at bringing joy back into their lives: "just says yes." Raising two boys – a curious six year-old and a rebel teen from a previous marriage — in a household devoid of feminine influence, and with a lack of rules, life becomes exuberant, instinctual, reckless… and on the constant verge of disaster. The three multi-generational boys of the Warr household, father and sons alike, must each find their own way, however tenuous, to grow up.

Taglines:
Inspired by a true story

This is the first time that South Australian Director Scott Hicks has filmed a movie in his home state of South Australia since 1996's Academy Award winning
Shine.


There is much to admire in this film.

The acting is superb. In fact it is Oscar worthy, whether from Clive
Owen or either of the young actors playing his sons. (I fear the 6 year
old will get all the praise, but the 14 year old's performance was
simply brilliant and more difficult.)

The story is honest, fresh, and touching. This isn't a, "What happens
if…" movie. This is not just a true life story, it is a true to life
story. You can see that Scott Hicks had one goal, honesty. He succeeds
at every level and this is perhaps the most honest film you will ever
see.

So why did I debate giving this film a 6 or 7 and not an 8 or 9 or 10?
Because in this quest for truthfulness, it often fails to satisfy. It
is, in many ways, a movie that only asks questions and provides no
answers. They did their best to reach inside this story and create a
beginning, middle, and end, but the truth is that at the end you are
left without any of your needs met. I absolutely did not want Hollywood
elements tossed in, but the story is simply incomplete. It is real. And
real stories are incomplete. I suppose I want to praise this movie for
being brave enough to not satisfy while warning friends, "Look, this is
a very good film, but it's focus is honesty even if that means ignoring
your needs as an audience."

Perhaps over time I will come to see this as brilliant. The characters
are often not getting their needs met, and neither does the audience.
But how do you recommend someone pay $10 to not have their emotional
needs met? At the screening I attended, there was a Q&A with Scott
Hicks and Clive Owen. Many people joked about a sequel with their
questions, because clearly there could never be a sequel. Even Clive
joked about sequel titles. You know what? I believe all the sarcasm
about a potential sequel came from the truth that this story is
unfinished.

If you feel like seeing honesty and emotional truth, if you want a
break from Hollywood BS, if you want to see a slice of real life
without any pretense or falsehood, rush to this movie. And I do hope
you enjoy it more than I did because of these warnings.