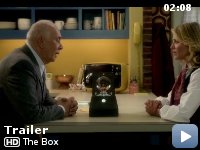 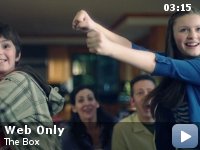 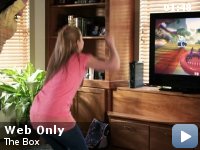 A small wooden box arrives on the doorstep of a married couple, who know that opening it will grant them a million dollars and kill someone they don't know.

Storyline
Norma and Arthur Lewis, a suburban couple with a young child, receive a simple wooden box as a gift, which bears fatal and irrevocable consequences. A mysterious stranger delivers the message that the box promises to bestow upon its owner $1 million with the press of a button. However, pressing this button will simultaneously cause the death of another human being somewhere in the world, someone they don't know. With just 24 hours to have the box in their possession, Norma and Arthur find themselves in the cross-hairs of a startling moral dilemma and must face the true nature of their humanity.

Taglines:
You Are The Experiment

Martin Teague:
Sir? If you don't mind my asking… why a box?

Arlington Steward:
Your home is a box. Your car is a box on wheels. You drive to work in it. You drive home in it. You sit in your home, staring into a box. It erodes your soul, while the box that is your body inevitably withers… then dies. Whereupon it is placed in the ultimate box, to slowly decompose.

Martin Teague:
It's quite depressing, if you think of it that way.

Arlington Steward:
Don't think of it that way… think of it as a temporary state of being.

'The Box' should be marked 'return to sender'

Set in 1976 for no apparent reason other than to keep the set dressers
busy, 'The Box' was directed by Richard Kelly ('Donnie Darko'), and
stars Cameron Diaz and James Marsden as Norma and Arthur Lewis, a young
couple who are supposedly struggling financially even though they both
have successful careers–she as a high school teacher, he as an optical
specialist at NASA's Langley, Virginia, Research Center. They have one
child, Walter (Sam Oz Stone).


One day the Lewises find a parcel on their doorstep, containing a black
box with a big red button. There is a note from a 'Mr. Steward'
indicating that he will return at 5:00 PM to explain about the box.

The mysterious Arlington Steward, played by Frank Langella, shows up at
the appointed time, nattily attired in an elegant Savile Row suit. He
is polite but businesslike, however his most noticeable feature is his
face, half of which appears to have been blown off and improperly
attended to. Langella is the only thing worth watching in the movie,
however he is unfortunately upstaged by his own makeup, which resembles
that of Harvey 'Two Face' Dent (Aaron Eckhart) from Christopher Nolan's
'The Dark Knight.' It's like the elephant in the room: one can try to
ignore it, but it's more than a little distracting.

Steward explains that he will return in 24 hours to collect the button.
If, during that time, they decide to unlock and push the button, he
will give them $1 million cash. The only catch–and it's a big one–is
that somewhere a stranger will die. It might be across town, it might
be on another continent, however Steward assures them the victim will
be someone unknown to them. As a show of good faith, he leaves them
with a crisp $100 bill, theirs to keep whether they push the button or
not.

Arthur and Norma are skeptical, believing the whole thing to be a scam
or an elaborate hoax, however it isn't long before they begin to wonder
what would happen if they did push the button? Would they really get a
million dollars? Would somebody really die? Weary of the speculation,
Norma slaps the button. Nothing happens. However, their initial relief
gives way to alarm when Steward shows up the next day with a briefcase
full of cash. They decide to call the whole thing off, however Steward
tells them it's too late. "You've already pushed the button," he
explains. As Steward's limo pulls away, Arthur notes the license
number, which he later discovers is registered to the NSA (National
Security Agency).

At this point the film begins to veer deeply into unfollowable
territory as the secondary characters start springing nosebleeds and
flashing peace signs. Meanwhile, the town becomes invaded by pudgy,
slack-jawed geeks in bad shirts who start following Arthur around like
an advance scouting party for a race of zombie alien nerds. Arthur
eventually becomes trapped by the menacing bookworms in the library
(?), where Steward's spinsterish wife shows up–whom we haven't seen
till now–and informs Arthur that in order to get out of the library he
must step into one of three vertical columns of cheesy-looking digital
water effects. 'What happens if I choose the wrong one?', Arthur asks,
seeming far less baffled than he ought to be under the circumstances,
and certainly far less baffled than the audience is by this time.
'Eternal damnation,' the spinster says ominously.

Arthur steps into the middle column of digital liquid effects, and
after a brief absence suddenly appears, still in his water cocoon,
hovering over Norma's bed. When she wakes up and sees him, the water
bubble bursts and Arthur tumbles onto the bed in a shower of water
which, oddly enough, continues to drip from the overhead water pipes
just out of camera range while a sodden Marsden and Diaz flop around on
the bed.

It's confusing, I know.

We eventually learn that Steward was once the public relations officer
for the NSA, until he was struck by a lightning bolt that destroyed
part of his face. He was pronounced dead, but later came back to life,
having been transformed into a sort of superman who now serves 'the
ones who make the lightning,' and whose powers have enabled him to take
over the CIA, the NSA, and NASA all by himself.

And what is the point of all this nattering rubbish? Apparently,
Steward's mission is to subject humans to a kind of biblical character
test (e.g., the 'Binding of Isaac'), to determine whether humanity is
worth saving. If enough people pass the button test by refusing to push
it, Steward's god-like overlords will spare the race. Unfortunately,
those people who do push the button, such as Norma and Arthur, must be
punished for their moral spinelessness, to which end they are subjected
to a series of dreary 'Lady or the Tiger' ordeals that play out like
one of those 'Saw movies,' except without the entertaining gore or the
benefit of a coherent plot.

There is a point in 'The Box' where Arthur, who is a technically-minded
guy, becomes curious about how the button works. Opening up the unit,
he is disappointed to find nothing inside.

Having seen The Box, I know exactly how he feels.