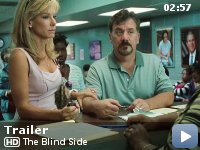 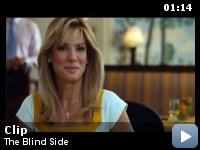 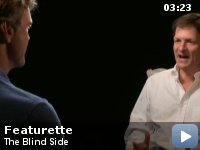 The story of Michael Oher, a homeless and traumatized boy who became an All American football player and first round NFL draft pick with the help of a caring woman and her family.

Storyline
Based on the true story of Leigh Anne and Sean Tuohy who take in a homeless teenage African-American, Michael "Big Mike" Oher. Michael has no idea who his father is and his mother is a drug addict. Michael has had little formal education and few skills to help him learn. Leigh Anne soon takes charge however, as is her nature, ensuring that the young man has every opportunity to succeed. When he expresses an interest in football, she goes all out to help him, including giving the coach a few ideas on how best to use Michael's skills. They not only provide him with a loving home, but hire a tutor to help him improve his grades to the point where he would qualify for an NCAA Division I athletic scholarship. Michael Oher was the first-round pick of the Baltimore Ravens in the 2009 NFL draft.

Taglines:
Based on the extraordinary true story

Continuity:
In the scene where Leigh Anne Tuohy is having lunch with her friends and they are discussing Michael Oher's appearance on the Touhys' Christmas card that year, the woman who says that Michael is a potential threat to Collins Tuohy is wearing a large necklace made of gold medallions. The medallions change their positions as the camera angle changes back and forth from Leigh Ann's POV to the friend's POV. Sometimes they are lying across her throat in a flat position and at other times they are twisted slightly, changing back and forth from flat to twisted for no apparent reason.

Leigh Anne Touhy:
There's a moment of orderly silence before a football play begins. Players are in position, linemen are frozen, and anything is possible. Then, like a traffic accident, stuff begins to randomly collide. From the snap of the ball to the snap of the first bones, closer to 4 seconds than 5.


I don't usually feel the need to leave comments, but this movie was
just to well done not to. I went in expecting more football, more hits
& highlights & as a huge football fan that was one of the main draws of
the movie. The football actually takes a back seat to a wonderful story
that is well executed by everyone involved. I've always thought Sandra
Bulluck has been over-rated, but she nails this role & deserves some
recognition down the road. The movie is so fantastic that anyone and
everyone can relate and feel connected to the characters. The ideal
target audience for this movie is children and adults alike. This movie
should be an Oscar contender but I know these types of movies rarely
ever win. Definitely deserves my vote!